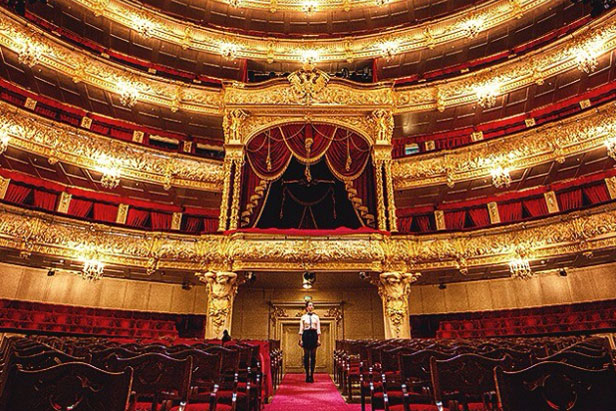 On October 20, the Bolshoi Theatre and Instagram teamed up on a project in which bloggers were invited to the theatre on its day off.

Sixteen popular Russian Instagram users were invited to attend a closed meeting at the Bolshoi Theatre as part of a photo project under the hashtag #EmptyBolshoi. The meeting was held on the theatre’s day off, and all the participants had the opportunity to take unique photographs of empty halls that are usually full of people: the White Foyer, the Imperial Foyer, and the auditorium.

By the time this article was published, Instagram users had posted 37 photos with the hashtag #EmptyBolshoi.

The event took place at the invitation of the Bolshoi Theatre. This is the first event of its kind in Russia. Russian Instagram users with anywhere from 10,000 to half a million subscribers attended the meeting.

They didn’t go through a special selection process. Active Instagrammers who frequently participate in various hashtag projects and attend InstaMeets came to the meeting.

The Empty movement was born in New York at the initiative of Instagrammer Dave Krugman, who invited several other users to a closed meeting at the Metropolitan Museum of Art during off hours, when there is no one in the museum. After the event, the participants uploaded pictures to Instagram with the hashtag #emptymet, showing this famous museum was shown from new and unusual angles.

The #emptymet project was so successful that now the movement has spread throughout the world, and many companies are glad to open their doors during off hours for Instagram photographers. The Metropolitan Museum of Art, the Statens Museum for Kunst in Copenhagen, and the Royal Opera House in London have already participated in the project.

The full version of the text can be found at TJournal.