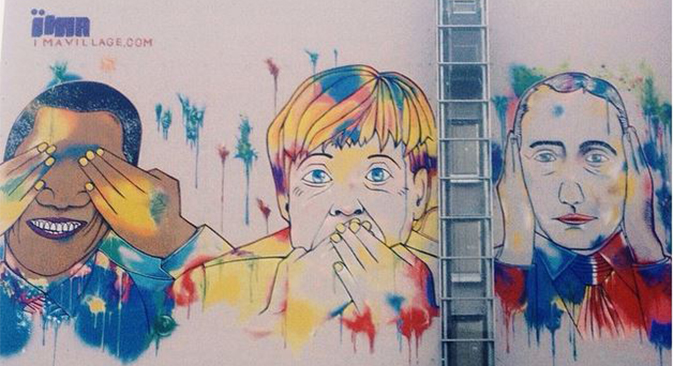 The Trilateral Contact Group for Ukraine has agreed on a comprehensive ceasefire in the Donetsk and Lugansk regions starting 00:00 a.m. Kiev time on Feb. 15, in line with a document outlining measures to enforce the Minsk agreements. The outcome of the meeting was so crucial, that people started even draw graffities dedicated to this topic.

The capital of Egypt greets Russian President Vladimir Putin. The Russian president visited Cairo for two days and it was his first visit in a decade in a bid to establish economic, political and military ties.

Moscow Zoo celebrates its 151th birthday. This festive date saw the opening of a huge lecture hall. It will host master-classes, lectures and children’s study groups on ecology and zoology.

Baumanskaya Metro station in Moscow is now closed for renovation, which is set to last 11 months. The station needs an overhaul, since its escalators, for instance, are the oldest in the Moscow subway.

World press photo of the year 2014 goes to Danish photographer Mads Nissen. The picture shows Jon and Alex, a gay couple, during an intimate moment in St. Petersburg. Russian photographers Sergey Ilnitsky and Sergey Ponomarev are also among the laureates.

A year ago at the Sochi Olympics American freestyle skier and slopestyle silver medalist Gus Kenworthy found and adopted 4 homeless puppies and their mother. After the Olympics he took the dogs back home to the USA and named them Jake, Mishka, Roxy and Emma.