The Wild West in the Moscow region 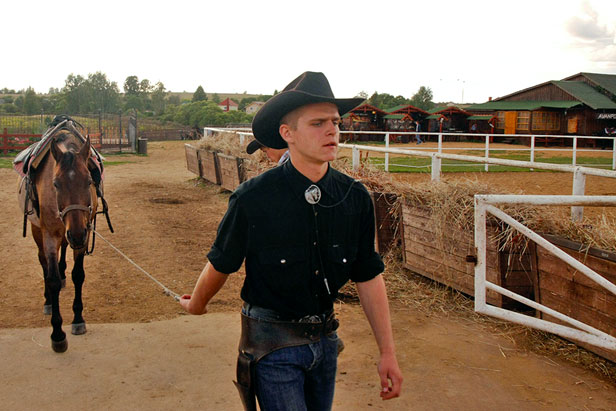 Just over 100 km to the west of Moscow lies a real, down-to-earth ranch.

These were once stables at a monastery that were completely abandoned after the Revolution of 1917. They were recently privatized, repaired, and remodeled in a classic Western style.

You can reach the ranch from Moscow by taking a regional commuter train from Belorussky Train Station to Gorod Mozhaysk Station, then, an approximately $3 taxi ride to the ranch. You can also get there by car along the Minskoye High way to the city of Mozhaysk.

The ranch has more than 50 horses. They've all been trained to carry tourists. You can arrange in advance to go on a horseback tour or sign up to learn how to ride. All of the employees are dressed in a Wild West style. According to one of the "cowboys", Evgeny Yaikin—or as they call him at the ranch, Wild Shot—“Working here is like going back to childhood, when we liked to play ‘Cowboys and Indians’.”

The ranch was created as a club for amateur riders. It's not just a tourist site. It's an advertisement for horse-based sports. The guys who work at the ranch are professional trainers. The ranch is open around the year. In the winter, you can go on an authentic Russian hunting expedition complete with hounds. In addition to that, everybody is dressed in a 19th-century style.

A two-hour horseback tour will cost about $50, but it's better to bring rubles in cash.

American themes are extremely popular in Russia. That's because most Russians grew up in the 1970-1980s, read a lot of Mark Twain and O. Henry, played 'Cowboys and Indians', watched Hollywood movies, and listened to rock-and-roll. That was passed on to their children. That’s why places like this ranch are in high-demand in Russia.