Khohloma is an antique Russian folk craft that sprung up in the 17th century in the district of Nizhny Novgorod. There are several accounts of how it appeared.

The most common version says that it was invented in the forestland near the town of Zavolzhye as a unique way of giving wooden utensils a golden look. Meanwhile, the actual birth of the Khokhloma industry is attributed to the Old Believers. Many Old Believers made icons and portrait miniatures. They took with them ancient icons and manuscripts with brightly colored headpieces, and brought fine art masterpieces, stroke-style calligraphy, and supremely rich floral ornaments.

In turn, local craftsmen perfected the lathe, passing porcelain-making skills and the art of three-dimensional carving through the generations. At the turn of the 18th century, Zavolzhye became a real artistic treasure house. Khokhloma utensils inherited their “classical shapes” and sculptured look from local craftsmen in the Volga region, and while the visual culture and “fine brush” technique came from icon painters. Last but not least, it discovered the secret of making “golden” utensils without using gold. 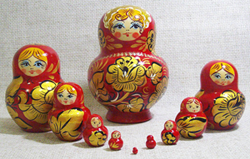 Khokhloma and matryoshka dolls have the same roots. Previously, they were all made by one association. But in 1928 Khokhloma painting broke away and began to focus purely on tableware and furniture. Matryoshka dolls became the exclusive preserve of the Semenovskaya Painting factory. Now "Golden Khokhloma" also produces matryoshka dolls, but paints them in the Khokhloma style.

Khokhlomas character and recognizability come from the mix of red, black, yellow, and green. All products are painted by hand and each work is unique.