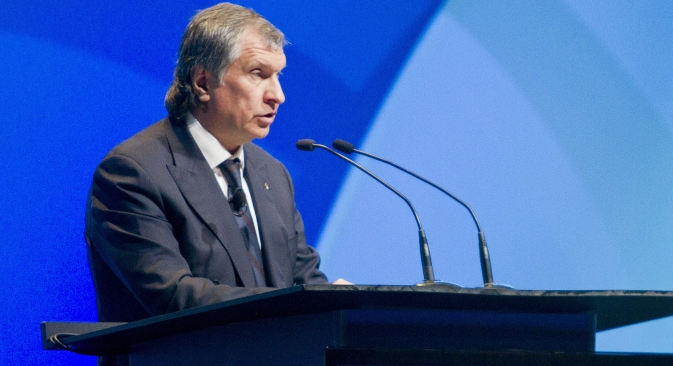 Rosneft President and Chairman of the Managing Board Igor Sechin speaks during the IHS CERAWeek energy conference in Houston March 6, 2013. Source: Reuters

Rosneft acquires the 30 percent stake in an ExxonMobil project in the Gulf of Mexico, underlining Russia’s largest oil company’s ambitious plans to become a bigger player in the global energy market.

Rosneft has taken a 30 percent stake in 20 deepwater exploration blocks in the Gulf of Mexico held by U.S. giant Exxon Mobil, the Russian company announced after its CEO, Igor Sechin, set out the company’s ambitious plans to an international audience of investors on March 6 at the Cambridge Energy Research Associates (CERA) Week in Houston, Texas.

Sechin, an influential former deputy prime minister and close ally of President Vladimir Putin, emphasized Rosneft’s increased collaboration with foreign oil companies, such as Exxon, Italy’s Eni and Norway’s Statoil, to attract investment for the exploration of Russia's offshore energy fields. Rosneft already has a strategic partnership with Britain’s BP, which last year became a major shareholder in Rosneft in exchange for its 50 percent stake in TNK-BP.

Rosneft is expected to finish the company's deal with TNK-BP in the second quarter of 2013.

"After the acquisition closing, which is expected to take place early in the second quarter of 2013, Rosneft will provide to its investors an updated synergies forecast for the united company," Sechin said during the CERA conference.

Rosneft is in the process of buying 100 percent of TNK-BP. According to a Rosneft statement, the purchase is slated to be completed in the first half of this year. Rosneft will pay BP some $12 billion in cash and the British company will be getting a 19.7 percent stock interest in the Russian outfit. Rosneft plans to pay the AAR consortium (Alfa Group, Access Industries and Renova), the other TNK-BP shareholder, $28 billion in cash for its stake.

Sources have said Rosneft could close the deal to buy 100 percent of TNK-BP from AR and BP late March or early April.

"The consolidated balance of Rosneft will also include about $5 billion of cash accumulated on the accounts of TNK-BP," Sechin said.

Rosneft is actively raising finance to close the deal, and has already reached agreement with traders Glencore and Vitol on an advance of $10 billion against oil supplies. It has also signed agreements with several international banks for a credit of $14.2 billion.

At the Houston conference, Rosneft also expressed its interest in opening a new oil and gas field in the Arctic Kara Sea. The company expects to begin exploration at this gas field by the end of 2014 with the assistance of foreign energy firms.

"2012 marked the beginning of large-scale operations at the Russian Arctic shelf," Sechin said at the CERA conference. "We successfully performed an exploration program at our fields in the Kara Sea. As a result of that and together with our partner ExxonMobil, the core structure for drilling in the Kara Sea was selected – it is Universitetskaya, where spudding is scheduled for 2014 – a year ahead of the license requirement."

"To drill this well, the West Alfa semi-submersible drilling platform has been contracted," he added. "We expect that, based on the drilling results, we should be able to open a new Arctic offshore oil and gas field by the end of 2014. The estimated resource base of this block alone is more than 35 billion barrels of oil equivalent and the total resources for the Kara Sea are more than 100 billion barrels of oil equivalent."

Rosneft is also seeking to expand its collaboration with BP.

Dudley said joint projects with Rosneft could include the Arctic and offshore production.

"But we are also discussing onshore projects, some of them outside Russia. The list is fairly long, but first we have to wait for the takeover of TNK-BP by Rosneft to be completed," Dudley said.

He said the joint projects might include joint production by BP and Rosneft in Venezuela.

"We've always been linked to Venezuela one way or another," he said. "And now it has become clear that huge investment will be needed in that country in the decades to come, we do of course plan to return there. BP is a big oil company, so you can expect us in Venezuela. Of course Rosneft can play an enormous role there."

The deal with ExxonMobil will give Rosneft 30 percent in offshore blocks covering a total area of 450 square kilometers. Seventeen are located in the western Gulf of Mexico, and the other three are in the central Guld. Depths vary from 640 meters to 2,070 meters.

Specialists are analyzing seismic reconnaissance data at all of these blocks. No oil is being produced there so far.

ExxonMobil will remain the project’s operator, while Rosneft will be represented in the project through its subsidiary, Neftegas America Shelf.

ExxonMobil is also expected to participate in the exploration of Rosneft's offshore fields in Russia together with Eni and Statoil. Together, Rosneft’s partners could invest up to $14 billion into geological exploration, Sechin told the CERA conference.

"Natural gas can account for half of the resource base in the Arctic," Sechin said in Houston. "Commercialization of these volumes is only possible with the development of infrastructure for liquefied natural gas. We are already in discussions with interested customers for this LNG."

Rosneft and ExxonMobil agreed in the middle of February to explore the possibility of building an LNG plant in the Far East.