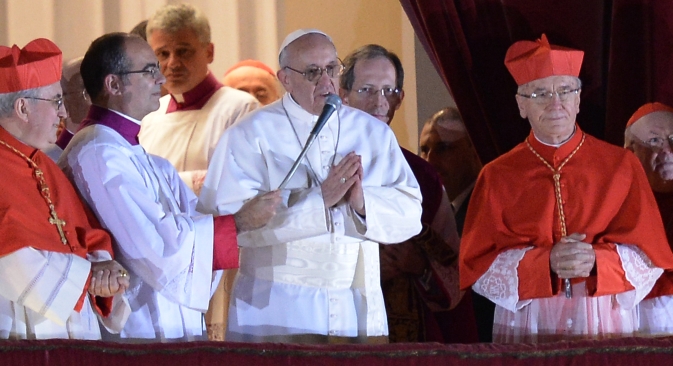 Argentina's cardinal Jorge Bergoglio, elected Pope Francis I addresses the crowd on the balcony of St Peter's Basilica's after being elected the 266th pope of the Roman Catholic Church on March 13, 2013 at the Vatican. Source: AFP

Representatives for the Russian church and the government hailed the election of the new pope as a good sign for Orthodox-Catholic relations.

The Russian Orthodox Church has welcomed the election of Cardinal Jorge Mario Bergoglio, archbishop of Buenos Aires, as Pope Francis.

"The new pope is known for his conservative views, and his papacy will evidently be marked by the strengthening of faith. The fact that he has taken the name of Francis - reminiscent of Francis of Assisi - confirms his understanding of evangelization primarily as assistance for the poor and the deprived, as protection of their dignity," Archpriest Dimitry Sizonenko, secretary for inter-Christian relations at the Department for External Church Relations, told Interfax-Religion.

"Hopefully, positive dynamics will be maintained in the development of ties between the Russian Orthodox and Catholic Churches" under the new pontiff, he said.

"But it is only possible to predict how Orthodox-Catholic relations will carry on under the new pope," Sizonenko said.

Sizonenko also welcomed the fact that Pope Francis knows the traditions of Eastern Christianity because his experience as the Ordinary for the Eastern Faithful in Argentina.

"Let's hope that this circumstance will help make inter-Christian relations stronger," he said.

As soon as he was elected, Pope Francis asked people to pray for him, which confirms his "great charisma and humbleness,"according to the priest.

Meanwhile, Russian President Vladimir Putin congratulated Cardinal Bergoglio on his election in a message released by the Kremlin press service on Thursday.

"I am convinced that Russia and the Vatican will continue promoting their constructive cooperation successfully on the basis of the Christian values that we share," Putin said in his message.

"Your Holiness, I wish you good health, prosperity and success in your work to strengthen peace and promote the dialogue between civilizations and faiths," according to the message.

Likewise, members of the Federation Council, the upper chamber of Russia's parliament, believe that newly elected Pope Francis will center his efforts on implementing moderate reforms and enhancing the authority of the Roman Catholic Church among the faithful.

Valery Shnyakin, deputy chairman of the Federation Council Foreign Affairs Committee, told Interfax on Thursday that the election of Jesuit Cardinal Bergoglio, who is of Italian descent, but was born and lived in Argentina, is symbolic in many ways.

"It is symbolic that a representative of Latin America, where the absolute majority of the population is Catholic, has been selected to lead the Catholic Church. It shows that this region will be in the spotlight for the new pontiff," he said.

Shnyakin added that the name taken by the new pope is equally symbolic.

"Francis of Assisi is one of the saints held in high esteem both by the Catholics and the Christians in general. As the legend goes, St. Francis of Assisi performed scores of miracles, healing the blind, resurrecting the dead and treating people suffering from leprosy. But he is best known for his vow of poverty and transforming the idea of poverty into a positive lifestyle ideal in accordance with Jesus the Christ's testament," the Russian senator said.

In his opinion the Catholic Church could undergo reforms under the new pope.

"I mean moderate reforms based on the new pontiff's life principles, and he will center his key efforts on bolstering the authority of the church, which today is in crisis due to multiple financial scandals and allegations of child sex abuse crimes committed by Catholic priests," Shnyakin said.

He hopes that the gap separating the Roman Catholic Church and the Russian Orthodox Church will narrow under the new pontiff.

"We would like this to happen because both the Russian Orthodox Church and the Catholic Church face similar threats. Morality is on the decline in society," Shnyakin said.

Another Russian senator, Sergei Shcheblygin, has suggested that the new pontiff will pursue a policy based on the traditional Christian views and ideas of morality that he shares.

"As it elected a new pope, the conclave displayed great responsibility and chose a person who will counter all threats facing the foundations of our civilization as the next pontiff," Shcheblygin said.

The senator cherishes the fact that the newly elected pope has always been opposed to the destruction of traditional family values and has been against same-sex marriages and abortions, thinking that every woman must give birth to her child in any situation.

"Judging by these reports, the pope has been leading an ascetic life, which demonstrates his human qualities and will serve as an example for the entire clergy and the faithful," he said.

For Shcheblygin it is important that the new pontiff can reaffirm the Catholic Church's commitment to genuine Christian values, as well as object to postmodernism principles in this institution's transformation, Shcheblygin said.

Addressing a possible meeting of the new pope and the head of the Russian Orthodox Church, the senator said he would like these two churches to form a united front in defending traditional values.