Igor Rozin
based on RIA Novosti, Interfax and BBC 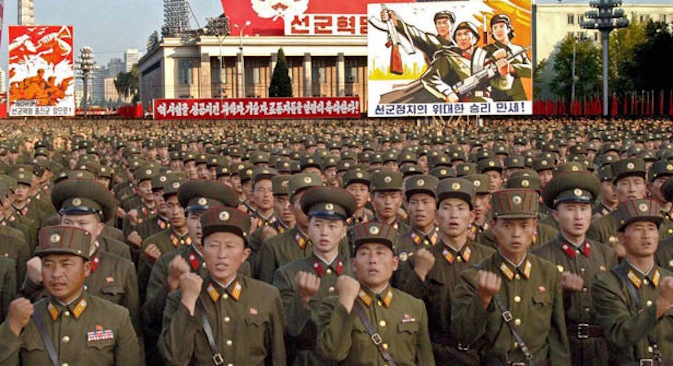 North and South Korea remain technically at war, since no peace treaty was signed following the Korean War in 1953. The Demilitarized Zone between the countries is the most heavily armed border in the world. Source: AP

North Korea's declaration of a "state of war" with its southern neighbor came as a result of a translation error made by foreign information agencies, RIA Novosti reports. Yet the statement brought about a lot of concerns from Russia's Foreign Ministry.

North Korea's declaration of the "state of war" with its South neighbor came as a result of a translation mistake made by foreign information agencies, RIA Novosti reports.

The original text of the North Korea statement clarifies the intentions of Pyongyang: North Korea's will act in accordance of "the laws of wartime" in case of further escalations and provocations, which may turn in "full-scale" and even "nuclear" war.

With tensions in the region escalating, Russia warns against military actions in the region. Moscow expects all parties to exercise as much responsibility and restraint as possible in light of North Korea's latest statements.

"We expect that all parties will display as much responsibility and restraint as possible and that no one will cross the line beyond which there can be no return," Russian Foreign Ministry Special Ambassador Grigory Logvinov told Interfax on Saturday. "Naturally, we cannot remain indifferent when tensions are growing near our eastern borders."

Once again, The Russian Foreign Ministry has warned against moves that could fan tension caused by North Korea's bellicose rhetoric.

"We take a negative attitude to any statements and moves that, one way or another, can lead to the escalation of tension," it said in a statement. "We expect that all sides will show maximum restraint and sense of responsibility for the future of the Korean Peninsula."

"We maintain permanent contact with our partners in the six-party negotiation process in seeking to prevent developments running outside the political and diplomatic framework," it added. "Developments on the Korean Peninsula, where bellicose rhetoric and tension have been fanned continuously over the past few weeks, are being closely followed in Moscow."

"We may simply let the situation slip out of our control and it will slide into a spiral of a vicious circle," he said in an official statement. "We are concerned that... unilateral action is being taken around North Korea that is increasing military activity."

Currently, Russia is staying in contact with its partners in the six-party talks on the Korean Peninsula nuclear problem in light of Pyongyang's  statements concerning a state of war with South Korea, Russian Foreign Ministry Ambassador-at-Large Grigory Logvinov said.

The six-party talks have been suspended at Pyongyang's initiative now. North Korea, South Korea, Russia, the U.S., China, and Japan should have participated in the negotiations.

At the same time, Moscow believes Seoul and Washington have been taking a balanced enough approach toward North Korea's ambiguous statement.

"Surely the situation is tense and dangerous, but there are also encouraging aspects: The U.S.' and South Korea's response is balanced and, in some sense, calm," a Russian Foreign Ministry source told Interfax on Saturday. "This is why the developments are not irreversible in their nature so far."

"It is not time to rant and rave in the public field now," he added. "It is time for active and non-public diplomacy aimed at looking for political solutions within the framework of international law, including the UN Security Council's obligatory decisions."

On March 30, Reuters reported (citing North's official KCNA news agency) that North Korea declared that it had entered a “state of war” with South Korea, saying that all issues between the neighboring countries would be handled in accordance with a wartime protocol.

“From this time on, the North-South relations will be entering the state of war and all issues raised between the North and the South will be handled accordingly,” the agency said mistakenly citing a statement carried by KCNA.

AFP reported on Saturday citing the same statement on KCNA that “The long-standing situation of the Korean peninsula being neither at peace nor at war is finally over.”

North and South Korea remain technically at war, since no peace treaty was signed following the Korean War in 1953. The Demilitarized Zone between the countries is the most heavily armed border in the world.

Prior to the exercises, Pyongyang threatened the United States with a preemptive nuclear strike amid warnings that it plans to terminate the Korean War Armistice Agreement. It warned of retaliatory countermeasures if the United States and South Korea went ahead with the drills.

On Thursday, March 28, the United States on Thursday dispatched two nuclear-capable B-2 stealth bombers on an “extended deterrence” practice run over South Korea.

The U.S. officials said the exercise should serve “to demonstrate very clearly the resolve of the United States to deter against aggression on the Korean Peninsula.”

North Korea responded on the next day by placing its strategic rocket forces on standby to strike U.S. and South Korean targets.

The article is a combined report based on materials from RIA Novosti, BBC and Interfax.