The United States has not abandoned the doctrine of a preventive nuclear strike on Russia and China, former General Staff Chief Gen. of the Army Yuri Baluyevsky said at a Moscow roundtable on Tuesday.

"The factor of preventive strikes, including those nuclear, is present in the strategies of the United States and NATO. No matter how sad that may sound, some in U.S. staffs, my former and current colleagues, do not rule out the first nuclear strike on Russia and China, because China is growing into a big problem for the U.S.," he said.

The United States annually spends approximately $10 billion on building missile defense, he said. "About $9-$11 billion is spent on missile defense each year. That is a pretty penny," Baluyevsky said. 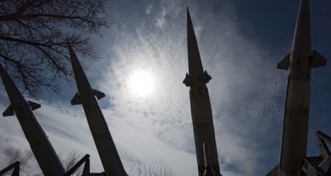 In turn, former Chief of the Russian Strategic Missile Forces Staff Col. Gen. Viktor Yesin said that the Russian strategic forces would be able to pass through any contemporary and future missile defense. "The technological groundwork that we have gives hope for passing through any U.S. potential missile defense not only in the first strike but also in the strike back," he said.