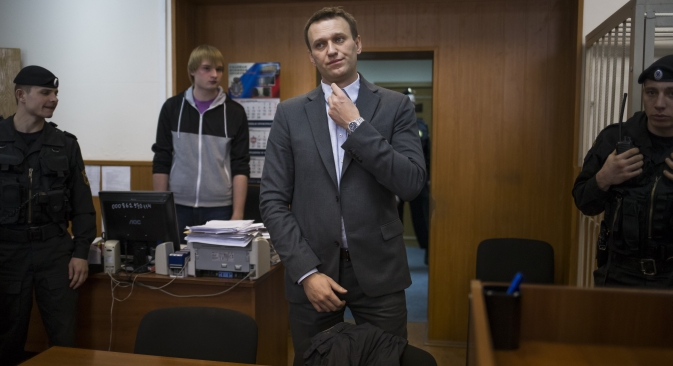 Russian opposition activist Alexei Navalny, center, listens to a judge inside a courtroom in Moscow on March 13, 2013, after his appeal against the country’s top investigative agency was rejected. Source: AP

High-profile opposition leader and anti-corruption campaigner Alexei Navalny announces his intention to run for the Russian presidency. Yet some politicians question his intentions.

Opposition activist and founder of the Anti-Corruption Fund, Alexei Navalny, said he intends to run for president of Russia in the future.

"I want to become president, I want to change life in this country," Navalny said late on April 4 on air on the Dzyadko 3 program of TV Rain (Dozhd) channel.

Navalny said that his main task was "for the millions of people who live in this country and for whom oil and gas flow from the ground, for them to not live in such poverty and hopeless mediocrity but to have a decent life as in European countries and not worse than Estonians."

At the same time, Navalny said he expected a guilty verdict on the Kirovles case.

"I have no doubt that the verdict will be guilty. Even with a suspended sentence on the guilty verdict, they [authorities] are solving many tasks of theirs, firstly, to prevent me from running for any office," Navalny said on air of TV Rain channel on April 4.

In accordance with Russian law, a citizen with a prior conviction cannot run for office.

It has been reported that the Kirov Leninsky District Court has scheduled the hearing of the Kirovles case for Navalny and Pyotr Ofitserov on April 17.

Investigators think that over 10,000 cubic meters of timber belonging to Kirovles was stolen from May to September 2009 and the Kirov region budget suffered losses of over 16 million rubles (nearly $510,000).

"Probably, his clever American or other foreign friends or other bright minds around him advised him to do this. He made a good chess move today," said opposition activist, writer and leader of unregistered party The Other Russia, Eduard Limonov. "Navalny made this declaration before the court to defend himself. You must admit that as a presidential candidate, Navalny sounds much more serious than just as a blogger."

"Probably, he already has no ambitions. He could have declared a year ago that he wanted to become president and it would sound convincing. And today it is just a gesture to defend himself. I would not seriously consider his abilities to become president. All this is aimed towards April 17, at the city of Kirov and at the world community," Limonov explains.