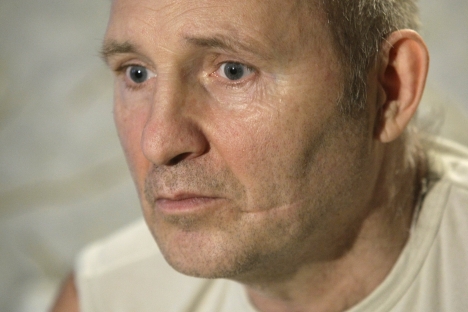 Mikhail Beketov, a vocal campaigner in defending the Khimki Forest, who was savagely beaten in 2008, died in a hospital on April 8, 2013. Source: AP

With the death of journalist Mikhail Beketov, who was savagely beaten in 2008 and died in the hospital on Monday, Presidential Human Rights Council and the Reporters Without Borders organization call for thorough investigation to punish attackers.

Russia's Investigative Committee starts an investigation into the death of journalist Mikhail Beketov, who was savagely beaten in 2008 and died in the hospital on Monday. Presidential Human Rights Council and the Reporters Without Borders organization call for actions to punish attackers.

Investigators in the Moscow region are looking into circumstances surrounding the death of journalist Mikhail Beketov, who died in the hospital of the town of Novogorsk near Moscow on April 8 presumably after choking on food, Gennady Galuza, spokesman for the Russian Investigative Committee's local branch, told Interfax on Tuesday.

"A preliminary inquiry is being conducted into Beketov's death. The body has been sent for a forensic examination" he said. "[The journalist is believed to have died from] mechanical asphyxiation caused by the obstruction of airways by food," he said.

Beketov was earlier moved to a clinic in the town of Novogorsk for regular rehabilitation treatment.

Mikhail Beketov, 55, an active campaigner in defending the Khimki Forest, was savagely beaten on November 13, 2008. He had his foot and fingers amputated and skull fragments removed from his brain. His head injuries left him unable to speak. The attack caused a public outcry in Russia.

Moscow region police promised to do everything possible to solve the crime. The Moscow region branch of the Russian Investigative Committee was subsequently appointed to investigate the attack on Beketov. The committee's central office was then put in charge of the inquiry.

The Russian government presented Beketov with a journalism award on October 31, 2011.

Meanwhile, the chairman of the Russian Presidential Human Rights Council, Mikhail Fedotov, has proposed observing a moment of silence for Beketov at the beginning of a Russian Union of Journalists congress on April 18.

"The Russian Union of Journalists should open its congress on April 18 by observing a moment of silence for Mikhail Beketov and other humble victims from our profession," Fedotov, who is also the union's secretary, said on his Twitter page.

"Mikhail Beketov's death is a tragedy for all honest journalists, a feast of impunity for the dregs of society who attacked him and a disgrace for the country," he said.

According to Beketov's defense lawyer Stalina Gurevich, the former editor-in-chief of the Khimkinskaya Pravda newspaper died suddenly at a hospital in Khimki on Monday.

"The death was apparently caused by heart failure. Doctors failed to save his life," she said, giving no further details. "There is one thing I definitely know. There were no errors made by the doctors. We have no questions for the medical personnel. Mikhail had failed to recover from what happened to him."

She added that Beketov had been hoping up to the end that the assailants would be found and prosecuted.

Lyudmila Fedotova, the head of the fund for aiding Beketov, said the journalist apparently died after choking on food. "He had a tracheostomy," she told.

"Mikhail Beketov fought to the end," the organization said. "He was a symbol of a Russia that struggles, of a civil society that has arisen over the past year to demand respect. Today, it is more important than ever that his attackers be brought to justice. We demand the truth."