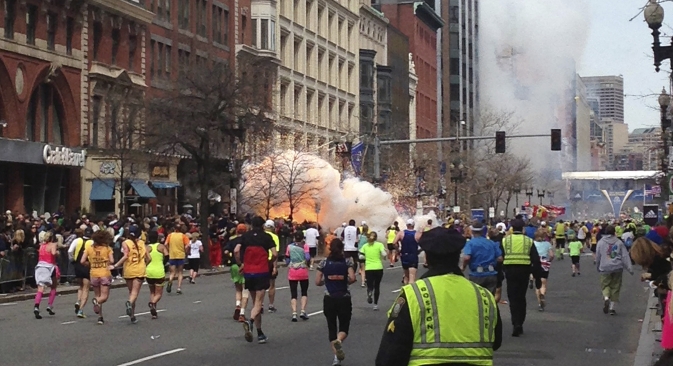 Two simultaneous explosions ripped through the crowd at the finish line of the Boston Marathon on Monday, killing at least two people and injuring dozens. Source: Reuters / Dan Lampariello

While Russians bring flowers to the U.S. Embassy in Moscow following the two explosions in Boston, the authorities try to find out who is behind the terrorist attack.

Muscovites are bringing flowers to the U.S. Embassy in Moscow following the two explosions that struck near the finish line of the Boston Marathon on Monday.

Calls for people to pay their respects to those who were killed or injured in the Boston blasts have appeared on social networking websites, including Facebook.

Russian champion sportsman and middle distance runner, Vyacheslav Shabunin, who was present at the Boston Marathon as a participant said he had heard the explosions but learned about the tragedy from television news.

"We had already returned to the hotel and did not witness the explosions but we heard two loud bangs," Shabunin told the Rossiya 24 channel.

The bangs occurred at an interval of 15-20 seconds, according to him.

"They [the bangs] were slightly unusual, I mean they resembled a cannon shot a bit but the explosion sounded more dimensional and dull," the athlete said. "We thought a renowned athlete might have reached the finish line or, maybe, the finish line was closed, which was unlikely. Then we were distracted and concentrated again only when sirens started wailing. Then we turned on the TV."

He said there were plenty of viewers near the finish line, where the explosions occurred.

"You can imagine: These are the last crucial 200 meters. There must have been several rows [of people], I think [the crowd] was very dense," the marathon runner said.

Shabunin added that he did not know what might have happened to other marathon runners from Russia. He said he knew a former compatriot named Svetlana, who finished running long before the explosions occurred.

Russians were not injured in Boston Marathon blasts

Mikhail Margelov, chairman of the Foreign Affair Committee of the Federation Council, the upper chamber of Russia's parliament believes that the Boston explosions indicate that Russia and the United States have a common enemy, who is omnipresent.

"What happened in Boston comes as a reminder that we need to consolidate instead of compiling lists that divide us because we clearly face a common enemy, who is omnipresent," he said. "This is the sad occasion when one should not ask 'for whom the bell tolls.' It is probably not important that the explosions were staged by U.S. internal terrorists because they are an integral part of the international network of assassins. I can sense it by the way they did it."

Although the Boston explosions do not have the same death toll as the terrorist attack that destroyed the Twin Towers on September 11, 2001, they pose a big threat because terrorists seek both to kill people and send certain intimidating signals, Margelov explains.

"In this case, they chose the center of a large U.S. city, traditional events that draw hundreds of people from different countries, police, participants, viewers to the finish line. The explosion at this line was intended to demonstrate the near omnipotence of those who staged it," he said.

According to Russian Liberal Democratic Party leader Vladimir Zhirinovsky, the explosions have been expectable.

"It was a collision of civilizations," he told journalists in the State Duma in Tuesday. "The U.S. bombards the Islamic world. How can they respond? Terrorist acts will continue in London and New York as long as they bombard Islamic countries. Terrorist attacks will continue because it is a huge country. Democracy provokes terrorist attacks. And it is impossible to close all cities."

"It is impossible to check 40,000 people with metal detectors, and if just one suicide bomber takes part in a marathon, he can blow himself up in the middle of the marathon. In this case, not three, but 300 people could be killed and thousands could be injured," Zhirinovsky added.

According to U.S. police reports, three people, including an eight-year-old child, were killed and more than 140 were injured, at least 17 of them critically, by two bombs that struck the finish line of the Boston Marathon on Monday.

Russian President Vladimir Putin has sent a telegram to U.S. President Barack Obama to present condolences over the terrorist act in Boston, the Kremlin reported on Tuesday.

The Russian president stressed that Russia "would be ready to give assistance to the inquiry of the U.S. authorities if necessary.

U.S. Ambassador to Russia Michael McFaul has thanked readers of his Twitter page for their words of support following the two explosions.

"Thank you for all the words of solidarity here. As Obama said President Obama: "Boston is a tough and resilient town. So are its people," McFaul said on his Twitter page on Tuesday.