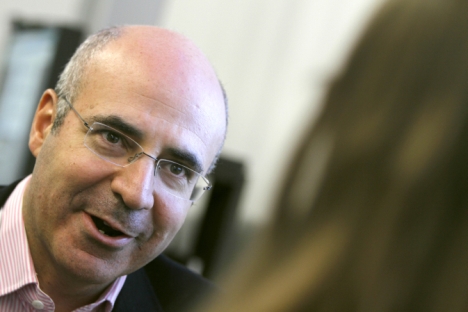 Russian law enforcement agencies asked the court to issue an arrest warrant in absentia for Hermitage Capital co-founder and CEO William Browder at a court hearing on Wednesday.

Russian law enforcement agencies seek to declare Hermitage Capital co-founder and CEO William Browder internationally wanted as an investigation into his alleged embezzlement of Gazprom shares is currently going on. A ditective was announced at a court hearing on Wednesday, at which police asked the court to issue an arrest warrant in absentia for Browder.

Judge Pyotr Stupin read out the directive at a hearing at Moscow's Tverskoi Court on Wednesday.

Magnitsky boss Browder called in for questioning by Russian police

The Russian Criminal Procedure Code stipulates that arrest in absentia cannot be ordered for a person before he or she is declared internationally wanted.

The directive on declaring Browder internationally wanted is dated April 8.

As a rule, if a court grants a motion on arresting a person in absentia, the investigative agency, in this particular case the police, passes the necessary documents to the National Central Bureau of Interpol. After analyzing these documents, the bureau forwards them to the Prosecutor General's Office, which is supposed to take the relevant procedural steps.

The Interior Ministry told Interfax that, if Browder's arrest in absentia is endorsed, he will be placed on the international wanted list.

"As the accused Browder is evading arriving for investigative procedures, even though he has been notified about this necessity using various methods, the investigation has filed a request with a court on considering his arrest in absentia as a pretrial restrictive measure," it said. "If a court grants this request, the mechanism of declaring Browder internationally wanted will be launched," it said.

Hermitage Capital told Interfax that a Moscow court would consider Browder's arrest in absentia in the near future.

Moscow's Tverskoi Court received a motion on Browder's arrest in absentia on Monday, while a defense attorney was notified about the hearing time only on Tuesday, on the eve of the Wednesday hearing, it said.

Tverskoi Court press secretary Yekaterina Korotova confirmed to Interfax that the court had received an investigator's request on Browder's arrest in absentia.

Meanwhile, Hermitage Capital said the investigation's request on Browder's arrest has been initially dated April 12, the day when the so-called Magnitsky list was published in the United States.

The Interior Ministry investigations department announced at a press conference on March 5 that a criminal case had been opened into embezzlement of Gazprom shares by organizations set up by Browder (major fraud, Russian Criminal Code Article 159, Part 4). It claimed that the damage caused by Browder's activities in Russia amounted to about 3 billion rubles.

This case against Browder is unrelated to documents on Hermitage Capital's tax evasion, under which Browder and Hermitage Capital auditor Sergei Magnitsky, who died at a Moscow prison in 2009, are being tried in absentia.