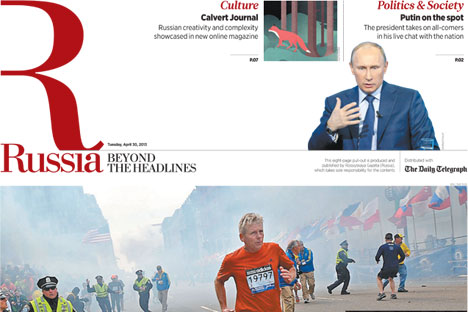 On April 30, Russia Beyond the Headlines, the international publishing project of daily Rossiyskaya Gazeta, debuted a redesigned and renamed version of its monthly supplement in the UK.

Now called Russia Beyond the Headlines, the redesigned supplement offers even deeper insight and wider coverage of Russia-related events, as well as a new layout developed by the design director of The Daily Telegraph. In its first issue, the rebranded supplement featured an analysis of Russia’s role in fighting international terrorism on the cover page. The supplement also covered modern Russian wine, the Cyprus banking crisis and the impact of the late Margaret Thatcher on Russia.

The monthly Russia-themed supplement first appeared in leading British paper the Daily Telegraph in August 2007 under the name Russia Now. Today the supplement is known among the newspaper’s audience as a reliable source of high-quality news and analysis about Russia’s political and economic development and relationship with the UK, as well as a place to find lighter features on Russian culture, cuisine and sport.