Moscow anti-drug conference brings together police from over 100 countries 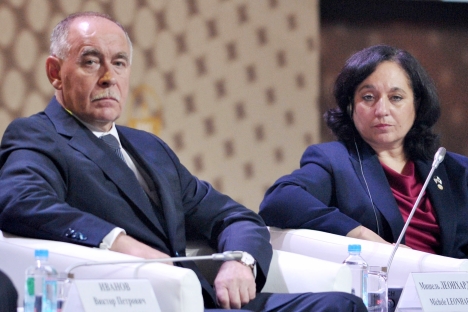 The world's police forces pledge to stronger fight against narcotics at the 30th International Drug Enforcement Conference opened in Moscow.

"The heads of the police structures of over 100 countries of the world have gathered here today. They should develop solutions to these problems. We should propose to politicians new methods to fight the drug threat," said Russian federal Drug Control Service Director Viktor Ivanov. "The interest in the issue of the fight against drugs is now huge. This problem has turned into a challenge to the entire mankind."

"This is comparable with the hydrocarbon market," he said. "When drug money comes to banks, competition is disrupted and the economy sustains significant damage."

In turn, head of the European group for prevention of money laundering and financing of terrorism Yuri Chikhanchin said some banks did not hesitate to attract drug money amid the crisis.

"There is information that some banks attracted such funds during the crisis to stabilize their position and to solve the liquidity problems," he said.

Meanwhile, Russian President Vladimir Putin called for arresting and confiscating money and assets received as a result of illegal operations with drugs.

He also supported the central coordinating role of the UN in the fight against the global drug threat.

"The role of this universal organization can not be substituted with anyone," Putin said adding that it was extremely important to reach the goal of decreasing the production of the most dangerous drugs, including heroin and cocaine, in the world by 2019.

In his opinion, the Collective Security Treaty Organization (CSTO) and NATO should fight the drug threat together.

"That would be a strongly consolidated effort, a response to common threats, which are real, rather than mythical," he said.

She emphasized that not a single country was able to succeed in the anti-drug fight on its own, as drug dealers were using global communication and financial networks. Approaches may differ but there are also some common elements, she said, noting that coordination and mutual wish for professional partnership were important.

Leonhart proposed to build on the joint success. Drug dealers choose the path of least resistance: They go wherever law enforcement is weak and there is no rule of law, she stressed.

The DEA administrator recalled cooperation between U.S. and Russian drug control officers, which helped block a heroin channel between Afghanistan and Russia. A dealer supplying heroin to Russia was recently arrested in Dubai, she said.

According to Putin Russia has enough expertise in organizing the anti-drug campaigns.

"Some 35 wholesale heroin distribution channels were liquidated and more than 890 million rubles (about $31.3 million) worth of drugs were seized within the past two years in the joint work of Russia and Kyrgyzstan," he said.

The Federal Drug Control Service and other specialized law enforcement agencies of Russia make a weighty contribution to the international anti-drug crusade, according to Putin said.

"The UN Office on Drugs and Crime says they intercept up to 40 percent of the heroin routed to our country. More than 11,000 attempts of wholesale drug trafficking to Russia were prevented by the Federal Drug Control Service in 2012," the president said.

At the same time, Putin warned against the legalization of any type of drugs, including "soft" ones.

"The drug dealing business is a breeding ground for organized crime, contraband and illegal immigration. So, we believe all types of drugs must be suppressed," he said. "We are concerned about "legislative mitigations" in certain countries leading to the legalization of the so-called "soft" drugs. This is a very dangerous path."