Putin and his wife announce divorce 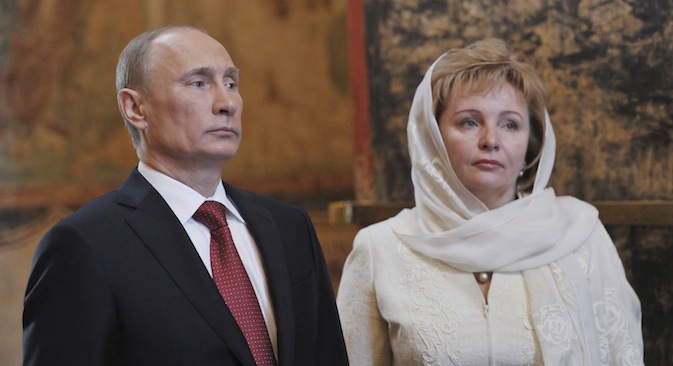 Vladimir Putin (L) and his wife Lyudmila at a service, conducted by Patriarch of Moscow and All Russia Kirill, to mark the start of his term as Russia's new president at the Kremlin on May 7, 2012. Source: Reuters / Aleksey Nikolsky / RIA Novosti

In his first televised appearance with his wife in months, Russian President Vladimir Putin overwhelms the nation with news about their divorce after 29 years in marriage.

Vladimir Putin and Lyudmila Putina appeared before the camera of Rossiya 24 state-funded channel on Thursday evening after they both saw La Esmeralda ballet at the Grand Kremlin Palace in Moscow.

This was the first time since Putin's inauguration in May 2012 that the couple, married in 1983, was seen together in public.

Standing in a finely furnished room, Putin and his wife shared their impressions of the ballet with a Rossiya 24 correspondent in what in retrospect sounded as an allegory of their relationship.

"The music was beautiful," Lyudmila Putina echoed. "Our ballet has achieved splendor and perfection. The movements were so airy and inconspicuous. It seems they're flying but their hard toil remains unseen to the audience."

After they exchanged a few more remarks, the correspondent broached a very delicate subject. "Rumor has it you live apart. Is it true?"

"It's true," Vladimir Putin said. "My activity and work are all about publicity, absolute publicity. Some like it, others don't. Some are absolutely incompatible with it. Lyudmila Alexandrovna is done keeping watch. It's been eight years, or nine... yes, nine. So... It was a mutual decision."

Lyudmila Putin chimed in to say she subscribes "to the words of Vladimir Vladimirovich."

"Our marriage is over because we barely see each other," she said after a pause. "Vladimir Vladimirovich is engrossed in his work, our children have grown up, they live their own lives. It so happened that he and I live our lives. I really don't like publicity."

"Lyudmila Alexandrovna mentioned children - we love them, we are proud of them," Putin remarked. "They have grown up and live their own lives. They, by the way, studied in Russia and are based in Russia."

Lyudmila and Vladimir Putin have two daughters, Maria, 28, and Katerina, 26.

"Lyudmila Alexandrovna and I will always be very close," Putin said.

Lyudmila Putina agreed: "We have a very good relationship, and I am grateful to Vladimir Vladimirovich for still supporting me and our children, he takes a lot of care about our children, and they feel it."

The correspondent asked in a bashful voice if it actually is a divorce.

"You can call it a civilized divorce," Lyudmila Putin said.

Vladimir Putin thanked the correspondent making it clear that the interview is over.