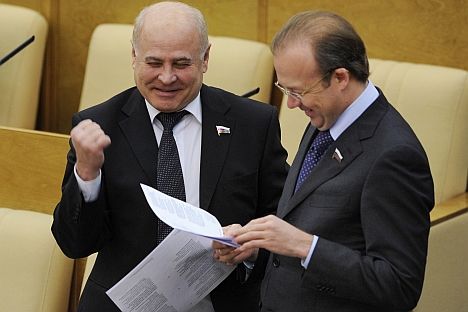 About 6,000 businessmen could be amnestied, according to chairman of the Business Against Corruption center Andrei Nazarov (left). Source: Kommersant

Russia's authorities submitted a draft resolution on economic amnesty to the lower house of the Russian parliament. Yet the amnesty is hardly likely to apply to former Yukos CEO Mikhail Khodorkovsky, according to lawyers.

A draft resolution on the declaration of amnesty has been submitted to the State Duma on Tuesday. The document is expected to be debated next week that will be the last plenary week of the spring session. It will have three plenary meetings on July 2, 3 and 5.

Earlier Russian President Vladimir Putin urged the lower house of parliament to debate and support a draft resolution on economic amnesty before the beginning of the summer vacation.  About 6,000 businessmen could be amnestied, according to chairman of the Business Against Corruption public procedures  center Andrei Nazarov.

The State Duma draft resolution on the economic amnesty applies to first time offenders convicted of loan and business frauds, money laundering, tax evasion and some other minor offenses. The amnestied persons will be exempt from additional penalties if they have not been served, excluding the ban to occupy certain positions.

However, the amnesty will not apply to persons who committed other crimes in addition to the offenses listed above, who had an earlier conviction of premeditated crimes, and who had been pardoned or amnestied earlier and committed new crimes.

In addition, the draft resolution  ends the investigation of crimes listed above if suspects and defendants return property and compensate for losses. Besides, the document stipulates the release of amnestied persons whose sentences are yet to enter into force.

According to a report published on the Kremlin website, "property return or compensation for losses is a mandatory condition for the amnesty of suspects and defendants."

"This condition is set for persons whose criminal cases are being heard in court or are under preliminary investigation and persons whose sentences have entered into force,"it reads.

The amnesty will apply to convicts, persons with suspended sentences and persons released on parole, it said.  Also, the draft resolutions submitted by the president regulate procedures for the release of amnestied persons from custody and termination of their criminal cases.

The economic amnesty will be in effect for six months since the moment it is announced.

Meanwhile, Chairperson of the State Duma Committee for Security and Combating Corruption Irina Yarovaya argues that persons who have committed crimes impairing public security must not come under economic amnesty.

"I think this will be discussed in detail. The logic is to relieve those people from criminal liability, whose crimes did not impair public security," Yarovaya told Interfax.

She added that a bill is being drafted that would tighten liability for misappropriating budget resources.

"Misappropriation of budget resources is a violation of national interests. Such crimes should involve special liability," she said. "If anyone dips his hand into the state treasury, he must be jailed for 15 years."

However, "laws have no retroactive effect," she said.

When a law is passed tightening liability for misappropriating budget resources, it will not apply to suspects in the high-profile cases connected with Rosagrolizing and Oboronservis, Yarovaya added.

Likewise, economic amnesty does not apply to former Yukos CEO Mikhail Khodorkovsky and his business partner Platon Lebedev, according to their defense.

"As we have suspected, although hope dies last, this amnesty was not intended to release Khodorkovsky and Lebedev," Lebedev's lawyer Vladimir Krasnov told Interfax.

"Comparing what was planned at the start and what happened in the end: Great cry and little wool," Krasnov said.

"The amnesty of even one or ten persons is a good cause. But what an amnesty it is. A person commits one's first crime and repays the damage. Everything this amnesty is about is already envisaged by law. It was the question of big cases that caused big damage," Krasnov added.

Russian business ombudsman Boris Titov regards the bill on an economic amnesty as a result of compromise and regrets that it does not cover the main key Article of 159 (fraud) of the Criminal Code.

"The draft amnesty tabled to the State Duma is the fruit of public compromise. Therefore we are glad that it materialized in principle," Titov told Interfax. "Now the amnesty will apply to slightly fewer people than we planned at the very start."

Meanwhile, the oldest human rights activist and head of the Moscow Helsinki Group Lyudmila Alexeyeva seems to be not happy with the draft of the amnesty for economic crimes.

"In particular, the part that a suspect or defendant, who wants to be amnestied, has to return property or repay damages is the fly in the ointment," Alexeyeva told Interfax. "This amnesty is not event complete but false. It will free the people, who are guilty. It will keep the innocent ones behind the bars. We have very many innocent ones serving time in penal colonies."

In her opinion, it would be reasonable "to ensure that those innocently convicted are released and those who went to prison for nothing do not have to repay damages to those who imprisoned them."