"A new tank, an infantry combat vehicle and an armored personnel carrier will be ready in 2015; the Prospective Airborne Complex of Frontline Aviation, the S-500 air defense system and a corvette will become available in 2016, and a new-generation destroyer will be created in 2018," he said at a meeting of the Russian Defense Ministry Board in Moscow on Thursday.

The work on these armaments "has been steady and uninterrupted," he said. 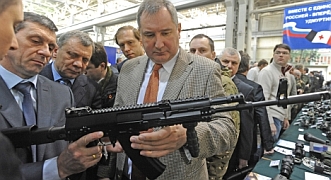 The rate of modern armaments and hardware in the Russian Armed Forces is supposed to reach 30 percent in 2015 and 70-100 percent in 2020, the General Staff chief said.

"Annual deliveries of 70 to 100 jets, over 120 helicopters, eight to nine warships and submarines and up to 600 armor pieces have been planned for reaching the goal," Gerasimov said.

Available weapons will be modernized alongside the procurement of new hardware, he said. "Troops will receive over 2,500 pieces of modernized armaments and hardware before 2020, and their main parameters will not be inferior to those of contemporary products," he said.

More than 400 military units will be equipped with contemporary and prospective armaments, military and special-purpose hardware before 2020, Gerasimov said.

Contracts for the entire period of service life of mass products will be signed starting from this year, he said.