RBTH
Interfax
The Russian Supreme Court has upheld a lower court ruling that found the ban on wearing hijabs, i.e. Muslim head veils, at schools in the Stavropol territory legal.

The Russian Supreme Court has upheld a lower court ruling that found the ban on wearing hijabs, i.e. Muslim head veils, at schools in the Stavropol territory legal.

The Supreme Court also turned down an appeal by lawyer Murad Musayev representing Muslims of the Stavropol territory against the Stavropol Territory Court's ruling on a lawsuit against the territorial administration's ban on the wearing of hijabs at local schools, an Interfax correspondent has reported. 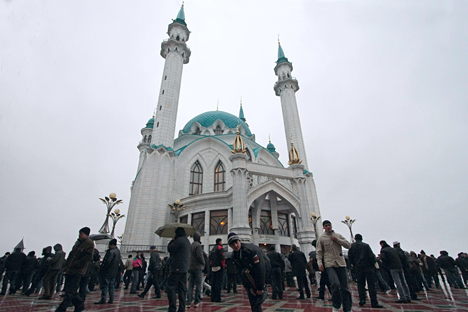 Related: Islam in Russia faces the threat of radicalism

Musayev argued in his appeal that the ban on the wearing of religious clothes violated the claimants' constitutional rights.

"The Russian constitution guarantees everyone their right to freely choose a religion, and only the federal lawmaking body can restrict the right to freedom of conscience and faith," the appeal says.

The claimants filed their appeal after they were barred from attending a school on the grounds that they were dressed in line with their religious convictions. Therefore, the claimants had to either leave their ordinary school for a madrasa or switch to distance learning.

Wahhabism expansion in Russia leads to growth of Islamophobia

However, the Stavropol Territory Court ruled that religious attire in school would be in conflict with the secular nature of Russia's educational system.

"Restrictions in appearance ensure normal functioning of educational institutions and equality of students belonging to different faiths and denominations. The appearance of students should comply with the official style and be secular," the court said.

The court also found that freedom of religion cannot be tied to the right to wear religious attributes.

A prosecutor and a representative of the Stavropol territory administration asked the Supreme Court to turn down the appeal.

Religion in Russia stavropol Russia in the context of Islam News