"A home-made rocket with a poisonous chemical substance yet unknown, the same as one the terrorists used in Khan al-Assal on March 19, struck this area early on August 21 from a position taken by insurgents. Casualties among civilians are reported," Lukashevich said in a statement on Wednesday.

The information that the Syrian authorities used chemical weapons resembles a provocation planned in advance, the statement said.

"The fact that agenda-driven regional mass media have begun an aggressive attack at once, as if on command, laying all the responsibility on the government, draws attention," the statement said.

"It is apparently no coincidence that information like this regarding the authorities using chemical weapons has been thrown in before, including in the past days, citing some opposition sources, however it was not confirmed later," Lukashevich said. 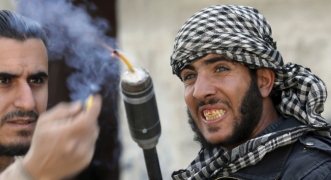 "All this can only lead us to think that we are dealing again with a provocation planned in advance," Lukashevich said.

"The fact that the criminal action near Damascus was carried out just when the mission of UN experts to investigate the statements on possible chemical weapons use there has successfully begun its work in Syria points to this," the statement said.

"Moscow thinks that it is important to hold an objective and professional investigation of what has happened," Lukashevich said.

"We are urging again all those who have the opportunity to influence armed extremists to make every effort to put an end to provocations with the use of poisonous chemical substances," the statement said.