Russia Beyond the Headlines launched in the Washington Post 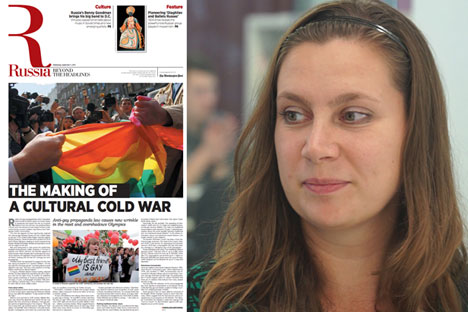 After a nine-month hiatus, the international media project relaunches its D.C. supplement with a new format and a new name.

In early 2013, the decision was made to rejuvenate the supplement with a new design that takes into consideration modern press trends towards more feature-style writing and more compelling visuals. The supplement was reworked during the course of a nine-month hiatus.

The supplement that appeared on Sept. 11 – under the project’s corporate name Russia Beyond the Headlines – features a fresh, open design that emphasizes more space and more graphics. It also allows for longer texts that offer a deeper exploration of themes of particular interest to the Washington Post audience.

The lead story focused on the ongoing controversy over LGBT rights in Russia. Supplement editor Elena Bobrova, who spent five weeks this summer in the U.S. partially in preparation for the relaunch, said that this topic was selected for the lead story because it was the first subject she was asked about by Americans when they learned she was from Russia.

View the video by RBTH: New design of Russia Beyond the Headlines in the Washington Post

“Most media paint the situation around the law as only black,” Bobrova said, “when the reality is a little different. Russia is a conservative society and is influenced by the Orthodox Church, which is critical of LGBT. This topic gave us a chance to look at cultural differences between Russia and the U.S.”

The new layout also accommodates shorter columns that editors hope will become “must reads” for Washington Post readers. These include a column about Russian history and the places it intersects with America’s past.

The first of these columns explores a year-long visit by the Russian Navy to New York and San Francisco during the U.S. Civil War. The supplement also features a culinary column.

The Russia supplement inside the Washington Post has always made coverage of cultural topics a priority, and the new supplement devotes nearly a page to an ongoing exhibit at the National Gallery of Art on Serge Diahgilev and the Ballets Russes. It also features an interview with Russian jazz great Igor Butman, who is embarking on a U.S. tour this fall.

"We chose stories for the redesigned supplement that we believe will resonate with Washington Post readers," said Nora FitzGerald, the Washington-based guest editor of the supplement.

In addition to Sept. 11, Russia Beyond the Headlines in the Washington Post will be published on Oct. 9 and Nov. 13. Supplement editors can be reached at US@rbth.ru.