"Any normal person should take the speculations and absolutely unlawful demands of certain abhorrent politicians and public activists [in Russia and in the United States] to cancel the ban, to amend the law and to resume the outflow of the Russian children as anti-patriotic, bizarre and inhumane," Astakhov's press office quoted the ombudsman as saying at the opening of the Russian-U.S. forum in Khanty-Mansiisk on Monday.

In the past decade when U.S. citizens were allowed to adopt Russian children, 20 orphans from Russia died in the United States, Astakhov said. "This shows that the actions of U.S. authorities in ensuring the safety of adopted children, introducing control over their living conditions and upbringing in adoptive families, selecting and training adoptive parents are insufficient. It is necessary to change the situation in this sphere immediately!" he said.

U.S. human rights activists, reporters and public activists have become engaged in issues related to children adopted from abroad, Astakhov said. "The time has come to join our efforts in the name of all children and not to divide them into categories based on their place of origin be they American, Chinese or Russian," he said. 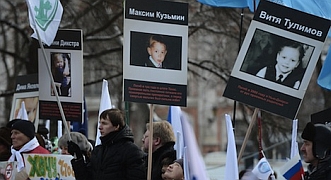 "As of today, we as a state and society are ready to take care of our children and help our families. This is an absolutely natural human desire. Every normal parent wants and aspires to bring up his own children! And not to give them to orphanages and not put them up for adoption. Russia, same as any loving mother, wants to bring up its children. And the United States, as the mother of its children, does not give away its babies," Astakhov said.

"We will consistently implement an important government task - that of ensuring every child's rights to a family. The right to a dad and mom. And the right to a homeland. And no one has the right to deprive a person of this right!" Astakhov said.

U.S. Senator Mary Landrieu, one of the prominent critics of the Russian adoption ban for U.S. citizens, said in an interview with the Radio Svobody radio station that Astakhov did not want to hear the truth and had refused to meet with representatives of the State Department during his visit to the United States in June.