RBTH
Interfax
The Russian Defense Ministry will form a unit of ice-class patrol ships, Defense Minister Sergei Shoigu said in a teleconference at the ministry's Situational Center on Wednesday.

The Russian Defense Ministry will form a unit of ice-class patrol ships, Defense Minister Sergei Shoigu said in a teleconference at the ministry's Situational Center on Wednesday.

"We are considering the formation of a unit of ice-class patrol ships and new Army hardware. Hopefully, we will find new ways of transportation of cargo in the Arctic, including support for vessels moving along Arctic routes," Shoigu said.

"I believe I do not have to remind you that this region is a major resource base of the Russian Federation, which has a strategic significance," the minister stressed. 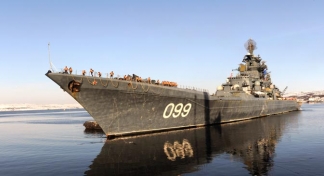 More: Russia building its military presence in the Arctic

"The achievement of long-term economic development tasks, energy security and global competitiveness of the country are directly connected to the development of the Arctic region," he said.

"Consistent with the Arctic state policy fundamentals, we have been working to build up the group of forces in order to ensure the protection of Russian national interests in that region," Shoigu said.

"For instance, it is planned to improve airfields and port infrastructure," Shoigu said. "We intend to restore airfields and piers on the archipelagoes of the Arctic Ocean - the Franz Josef Land and the Novosibirsk Islands."

He reminded the teleconference participants that "the Temp airfield on the Kotelny Island, a part of the Novosibirsk Islands, resumed operations in October at an order from the supreme commander."