RBTH
Interfax
A number of former Yukos top managers, who are currently residing abroad, are suspects in the so-called third Yukos case, sources familiar with the situation told Interfax on Monday.

A number of former Yukos top managers, who are currently residing abroad, are suspects in the so-called third Yukos case, sources familiar with the situation told Interfax on Monday.

"Four former Yukos top managers, among them former CFO Bruce Misamore and Steven Theede, are suspects in the criminal case opened on the counts of laundering of illegal gains and the misappropriation of assets," one of the source said.

He said they were suspected of laundering $10 billion, which, in the opinion of detectives, were misappropriated before 2005.

"Unfortunately, our foreign colleagues are not cooperative in this case, and it is impossible to indict the suspects," the source said.

He said accusations might be brought against former Yukos CEO Mikhail Khodorkovsky and some other former executives. 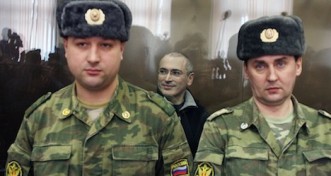 The source also stressed that $10 billion, which, in the opinion of the detectives, were stolen by the former Yukos administration was not a part of approximately 1 trillion rubles (over $30 billion) which the former Yukos executives were accused of embezzling in their second case.

Russian Prosecutor General Alexander Zvyagintsev said in an interview with Interfax earlier that new criminal cases, to which the former Yukos CEO was related, were being investigated.

Khodorkovsky and former Menatep Group head Platon Lebedev were arrested in 2003 and sentenced to nine years in May 2005 on the fraud and tax evasion counts. The Moscow City Court reduced their sentences to eight years later.

A second criminal case was opened against Khodorkovsky and Lebedev when their first trial was nearing completion. The former Yukos executives were sentenced in December 2010 to 14 years for crude embezzlement and money laundering. Six months later the Moscow City Court reduced their sentences to 13 years.

The prison term was calculated from 2003, since the day of their arrest in the first Yukos case.