RBTH
Interfax
A Cambodian court may need up to two months to decide on the possible extradition of businessman Sergei Polonsky to Russia on fraud counts, lawyer Alexander Karabanov said.

A Cambodian court may need up to two months to decide on the possible extradition of businessman Sergei Polonsky to Russia on fraud counts, lawyer Alexander Karabanov said.

"The hearing started on Thursday. I think it may last from one to two months. My Cambodian colleague and lawyer Sergeyev are defending Polonsky," Karabanov told Interfax on Thursday.

In his words, the defense team insisted on the absence of grounds for the extradition of Polonsky to Russia.

Earlier the Cambodian court had temporarily refused to consider Russia's request for the extradition of Polonsky.

"The hearing on Polonsky's extradition was suspended in Cambodia because Cambodian prosecutors did not find formal elements of a crime in the activity of my client as presented by the materials from the Interpol," Karabanov told Interfax earlier.

It was reported on November 11, 2013 that Polonsky had been detained in Cambodia. The Russian Prosecutor General's Office sent a request for the businessman's extradition to the Cambodian law enforcement agencies. The trial of the case involving Polonsky's extradition has been postponed many times. 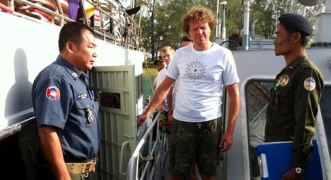 Polonsky was in prison in Cambodia in the period between December 31, 2012 and April 3, 2013 on suspicion of subjecting local sailors to violence and imprisonment. He faced three years in prison. However, his lawyers managed to reach agreements with the victims.

The sailors withdrew their claims and received compensation. The businessman gave his written undertaking not to leave the country and was released. However, the criminal case against him was not closed.

The Russian Interior Ministry's investigative department presented an indictment against Polonsky in absentia on June 14 in a case dealing with fraud during the construction of a residential complex in Moscow. Polonsky is suspected of embezzling over 5.7 billion rubles ($174.5 million) from investors of the Kutuzov Mile residential complex. Over 80 individuals have been recognized as victims of the fraud scheme.

Lawyer Karabanov said on November 25 that various states, among them the U.S., had offered political asylum to Polonsky.

Businessman Polonsky decides to get married in Cambodian prison

Russian businessman Sergei Polonsky, who is expecting extradition to Russia in a Cambodian prison, has applied for permission to officially marry his common-law wife Olga Deripasko in the prison, Polonsky's lawyer Alexander Karabanov told. Read more>>>