RBTH
Interfax
Moscow hopes all external players involved in the Syrian conflict will refrain from attempts to predetermine the outcome of the Geneva II, as well as any steps capable of disrupting the talks, Russian Foreign Minister Sergei Lavrov said.

Moscow hopes all external players involved in the Syrian conflict will refrain from attempts to predetermine the outcome of the Geneva II, as well as any steps capable of disrupting the talks, Russian Foreign Minister Sergei Lavrov said.

"We hope that all external players will encourage Syrians to reach an accord, to refrain - and to prevent the sides - from attempts to predetermine final agreements, from other steps capable of disrupting the negotiating process," he said at the opening of the Geneva II international conference on Syria.

The common task of the conference attendees is to secure an end to the Syrian conflict that has brought such woes to the Syrian people and has ruined this ancient land, the minister said.

"One should not let the wave of upheavals to inundate the neighboring countries, the entire Middle Eastern region is going through the most difficult period of its history," the minister said.

While Russia supports the Arab peoples' aspiration for a better life, sustained development and prosperity, the overdue reforms can be only efficient if implemented peacefully, non-violently, through a national dialogue, Lavrov said. 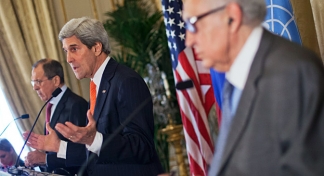 "Attempts to force upon the countries of the Middle East and North Africa the recipes of reforms from outside and to stage social engineering experiments throw back the process of political and economic modernization. One does not have to go far to see examples," Lavrov said.

"We are calling on all external players again to strictly abide by the basic principles of international law, including a respect for states' sovereignty, non-meddling in their internal affairs, and peaceful settlement of disputes," the minister said.

From the very start Russia has consistently maintained that the conflict can only be resolved on the basis of a mutual accord among the Syrians themselves, he said.

"This approach underlies the Geneva communique which, though with much delay, but still was unanimously approved by the UN (United Nations) Security Council in its resolution N2118 as an international legal framework for achieving peace in Syria," Lavrov said.

All participants of the Syrian settlement process want to keep Syria as a sovereign, territorially integral, secular state which guarantees the rights of all religious denominations and ethnic groups, he said.

"It is on this basis that today we are launching a dialogue between the Syrian sides. They are to agree on the specific parameters of the implementation of the Geneva communique and the sequence of steps that would enable the Syrian people to decide its future on its own," the Russian foreign minister said.