"The ship's captain has just called and said that they left the port," the source said.

The trawler is heading for fishing grounds in the exclusive economic zone of Guinea-Bissau where Senegalese soldiers detained it in early January and from where it was escorted to the port of Dakar.

The Oleg Naydyonov was released on a $1 billion bail paid by the ship-owner, the Fenix company from Murmansk. The bail may be returned to the ship-owner if the detention of the vessel is ruled illegal. 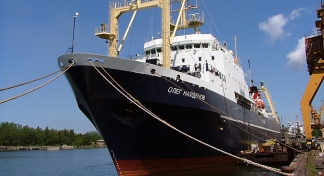 The Oleg Naydyonov trawler was detained by Senegalese servicemen on January 3 in the Atlantic Ocean, 46 miles off the shore of Guinea-Bissau. The crew of the ship is comprised of 62 Russian citizens and 23 natives of Guinea-Bissau. Their detention was carried out without an explanation of the reasons behind it and the vessel was escorted to the military port of Dakar.

The Senegalese authorities claim that the Russian boat was fishing illegally in the economic zone of Senegal, while according to the Oleg Naydyonov's captain, the trawler was in the zone of Guinea-Bissau. Russia is preparing to file a lawsuit with the International Tribunal for the Law of the Sea in Hamburg.

Russia's fisheries agency Rosrybolovstvo said that it felt that the incident was related to the growing competition for biological resources on the western coast of Africa.