RBTH
Interfax
The defendants and their lawyers announced this after the prosecutors read the indictment, an Interfax correspondent has reported.

The defendants in the journalist Anna Politkovskaya murder case have pleaded not guilty in court.

The defendants and their lawyers announced this after the prosecutors read the indictment, an Interfax correspondent has reported.

"My client Jabrail Makhmudov has no relation to this crime. He has never followed Politkovskaya. I had some doubts about it seven years ago, but now I am fully sure of that," lawyer Murad Musayev said.

On November 14, the Moscow City Court disbanded the jury after Justice Pavel Melekhin agreed with the prosecutors further trial of the case was impossible because three jurors had withdrawn from the trial because they were busy with their jobs or for health reasons. 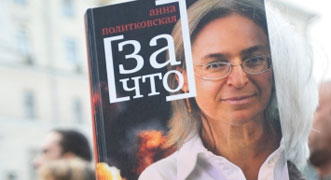 Politkovskaya, an investigative journalist from Novaya Gazeta, was killed in the lobby of her house in Moscow on October 7, 2006. The masterminds of the crime have not been determined.

According to the information possessed by the investigators, the mastermind is Gaitukayev, who created the organized group comprised of the other defendants in 2006. The investigators believe the members of the group thoroughly planned the Politkovskaya murder, purchased weapons, and coordinated their actions, and "Sergei Khadzhikurbanov supervised the group's actions."

None of the defendants are admitting their guilt.