"The attack continues. Beeline has stopped broadcasting us, too," Dozhd said on Twitter.

Anna Aibasheva, press officer for the company Vympelcom, has confirmed to Interfax that the broadcasting of the television channel Dozhd has been halted. She declined to comment on the decision and how long it will stay in effect.

On January 26 Dozhd polled its viewers by asking them to answer whether more lives could have been saved during the siege of Leningrad, had the city been surrendered to the German troops. 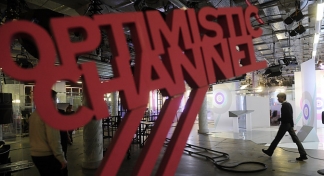 The poll was criticized by many politicians, public figures, as well as representatives of the Russian cable television market.

Meanwhile, prosecutors decided to check the television channel for possible violations, including extremism.

From a legal point of view, the Dozhd television channel is unlikely to be closed, but the situation surrounding Dozhd after its poll about the siege of Leningrad is first and foremost a question of moral integrity, Russian President's Press Secretary Dmitry Peskov said.

For its part, Roskomnadzor (the Russian Federal Service for Supervision in the Sphere of Telecom, Information and Mass Communications) saw the poll as violation of the mass media law and cautioned the channel about unacceptability of such violations in the future.

This "preventive" letter is not a warning and will not entail any sanctions against Dozhd, the agency's spokesperson said.