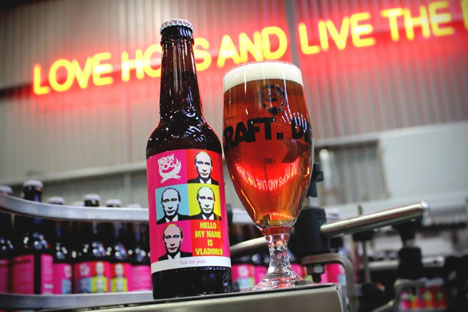 The brew is the newest product in BrewDog's Hello My Name is... series. Source: Press Photo

The brew is the newest product in BrewDog's Hello My Name is... series. The brewers say they decided to mock Putin's masculine image after a trip to eastern Russia. Here is the description of the new beer: "On the nose there's a huge explosion of audacious liberally-minded US hops, against a robust yet elegant malt backdrop. Flavours of malt sweetness and a touch of acidic berry sharpness combine and give way to an avalanche of lightly toasted, fruity blueberry muffin malitiness." The idea is for the drinker to get a feeling of "a cross-country topless ski journey through Siberia."

The beer is on sale for £2.89 per bottle. BrewDog says 50% of profits from the sales of the beer will be donated to charities that "represent oppressed minorities around the world". One crate has been shipped to the Kremlin as a gift. Another was sent to the Russian consulate in Edinburgh. According to the courier, the consulate refused to accept the parcel, so he had to leave it by the door.

The press service of the Russian presidential administration declined to comment for RBTH.

Arkady Bukh, the lawyer and the partner at the Bukh Law Firm, said it’s hard to believe that the Scottish Parliament's decision to allow gay marriages and the launch of Brewdog's new product is a pure coincidence.

“Brewdog is an infamously controversial Scottish brewery. So it comes as very little surprise that the company has apparently launched the very first 'protest beer' to register it’s disapproval of Russia’s anti-gay laws. It's all in a ruse to detract seriousness from the Winter Olympics by having a big joke at Putin's expense. I mean, what sort of a name is "Hello My Name is Vladimir" for a beer? Even the alleged content of the alcoholic beverage is another dig at Russia's refusal to adopt gay friendly laws. About 8 percent of the beer is believed to be the legendary Russian male aphrodisiac, Limonnik berries. It is almost impossible at the moment to see Russia following in the steps of other countries like the United Sates, the United Kingdom and Scotland anytime soon. In the meantime however, one thing is certain, protests will continue until significant changes are seen. Admittedly, splashing Vladimir Putin's made up face all over a product is not the most articulate way of protesting Russia's homophobic stance, but it sure catches people's attention,” – Bukh told RBTH.

Putin's portraits were previously used by other foreign brands. One was put on a series of potato crisps aimed at drawing society's attention to modern dictators. Shortly after Putin divorced, in June last year, a billboard went up in the southern part of Tenerife, on which the photo of an elated Russian president was accompanied by the slogan, "Single? Visit the Canaries!" The billboard was designed by the local real estate agency Vym Canarias. Putin's image was also used by a Chinese network of Tibetan medicine centers.