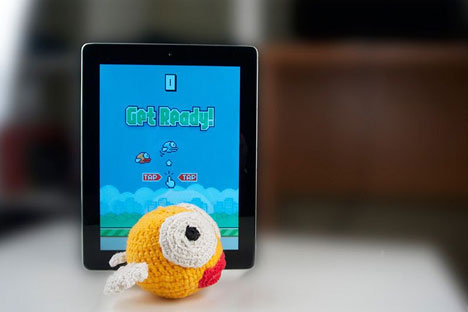 Kursk-based entrepreneur Vitaly Prikhodko decided to cash in on the viral mobile game Flappy Bird. He opened an online store, Flappy.ru, to market soft toys in the shape of the popular bird.

Kursk-based entrepreneur Vitaly Prikhodko decided to cash in on the viral mobile game Flappy Bird. He opened an online store, Flappy.ru, to market soft toys in the shape of the popular bird.

There is only one type of soft toy on offer at the moment, selling for 500 roubles (around $14) apiece. The range may be expanded in the future to include a smaller keyring version and a limited extra-large edition.

The toys are hand-made, but Prikhodko says he may arrange for factory production if needed.

Prikhodko points out that Flappy Bird has not yet been registered as a trade mark by anyone. He has no copyright plans for the name, saying that the game is going to be short-lived and will soon be forgotten.

Although the Flappy Bird game was free to download, Prikhodko argues that his toys are a good investment: "You will have something to remember the 2014 gaming hit even after the game disappears from App Store. Besides, you will get to control the bird at last, not vice versa."

Flappy Bird is a continuous gaming app in which the player is represented by a tiny bird. The bird has to fly between sets of pipes without colliding with them. The only two degrees of freedom are up and down: the player lifts the bird higher by touching the smartphone screen, while gravity pulls it down.

The game first emerged in mid-2013 but did not go viral until last week, when the total number of downloads exceeded 50 million. The app was earning its developer Dong Nguyen around $50,000 per day in ad revenue. On the evening of February 10, Nguyen deleted Flappy Bird from all app stores, saying that the game's success had "destroyed" his normal life.