RBTH
Interfax
Russian President Vladimir Putin has said he is unruffled by attempts to use the XXII Winter Olympic Games in Sochi for the purposes of anti-Russian propaganda in the foreign media.

Russian President Vladimir Putin has said he is unruffled by attempts to use the XXII Winter Olympic Games in Sochi for the purposes of anti-Russian propaganda in the foreign media.

"But there also existed, and probably still exists, another category of critics who are far from sports and are engaged in a competitive struggle in the sphere of international politics. Their path, their work is different. They have used this Olympic project in order to pursue their own goals in the area of anti-Russian propaganda," Putin said in an interview with Russian television stations.

Behind the scenes at the Closing Ceremony

"This has nothing to do with sport. Do you want to know why I have always treated this so calmly? I have done so because I know what this is all about. I know its price and I know that there is no point in arguing with it. Whatever we say and no matter how hard we try to make them change their minds, it is impossible because they are doing different work and have a different goal," the Russian president said.

"I would like to repeat that this is the competitive struggle in the sphere of international politics, or maybe even geopolitics, because when strong rivals emerge, in this case Russia, someone may get worried about it, someone may dislike it, and someone may get scared, failing to understand all the profound and qualitative changes that have occurred in Russian society," he said.

Hopefully, the Sochi Games managed to persuade the world that there was no reason to be afraid of Russia, Putin said.

"In this sense, the Olympic Games were important to us because, in my opinion, they have not just opened the door to Russia, but have opened the door to the Russian soul, the soul of our people, and have allowed other people to realize that they have nothing to be afraid of, that we are ready for cooperation, that we are open to this cooperation. These critics may appear to be unfriendly, but I do not think they can be described as such. As I have already said they are just doing different work. Hopefully, some of their fears have been allayed. And if this goal has been achieved to some extent, it is also a success of the Olympic Games," he said. 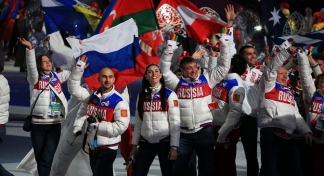 At the same time, many people were insulted by foreign media outlets' criticism of the Sochi Olympics, the president said.

"I want to tell you that it insulted all people. It means, as you have just said, that our foreign colleagues in charge of these issues achieved the opposite result," Putin said after being asked by a reporter to comment on foreign media companies' critical remarks targeting the Sochi Games and say which of these remarks were constructive and which were just propaganda.

"I would like to emphasize the difference between some things. First, over all of these years we have come under criticism, but on most occasions, it was constructive and very friendly criticism on the part of representatives of the International Olympic Committee (...) I think that we would have certainly done everything even without such well-meaning criticism and support, but, if the truth be told, I doubt that we would have managed to do everything at such a high-quality level because we lacked the huge experience that our friends from the IOC have. They handed this experience over to us as a present," Putin said.