RBTH
Interfax
Most Russians are following the events in Ukraine, and nearly half of them are sure that the recent protests in Kiev and other Ukrainian cities have been influenced by the West, as is seen from a public opinion poll of 1,603 people the Levada Center sociological service conducted in 130 populated areas of 45 regions of Russia on February 21-25.

Most Russians are following the events in Ukraine, and nearly half of them are sure that the recent protests in Kiev and other Ukrainian cities have been influenced by the West, as is seen from a public opinion poll of 1,603 people the Levada Center sociological service conducted in 130 populated areas of 45 regions of Russia on February 21-25.

The poll showed that 57 percent of Russians are closely following the ongoing events in Ukraine, 31 percent know about these events but are not following them very closely, 9 percent do not care about the protests, and 4 percent have not heard anything about them. 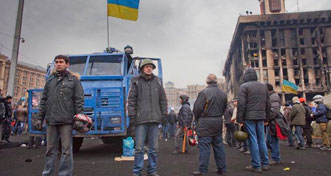 Vox Pop: The fate of Ukraine

As many as 43 percent of Russians aware of the latest events in Ukraine are sure that they essentially constitute a violent coup attempt, 23 percent call the events a civil war, 16 percent a people's uprising, and 11 percent a protest against President Viktor Yanukovych's corrupt regime.

In the view of 45 percent of those polled, the Ukrainians are protesting under the influence of the West seeking to draw Ukraine into the orbit of its political interests, 32 percent explain the riots by nationalistic sentiments in society, and 17 percent are sure that the protests were fueled chiefly by hatred toward Yanukovych's corrupt regime.

As many as 12 percent of those polled believe the Ukrainians are being driven by civil dignity and the refusal to accept arbitrary rule, another 12 percent see the protesters' actions as the desire to make Ukraine a civilized country similar to other European countries or free it from economic and political dependence on Russia, and 4 percent believe the standoff in Kiev was sparked as a protest against the Berkut riot police force's actions.

Nearly half of those polled - 45 percent - put the blame for the political crisis in Ukraine on Yanukovych and his entourage, 38 percent see the leaders of Western countries as responsible for the riots in Ukraine, 35 percent blame the Ukrainian opposition for escalating the conflict, and 4 percent are sure that the Russian leadership played the key role in the Ukrainian events (the respondents were able to choose several options when asked about those responsible for the conflict).

Over one third of the respondents - 36 percent - are outraged by the conflict between the authorities and the opposition in Ukraine, 16 percent feel sympathy with the protesters, 15 percent are afraid, 12 percent irritated, 1 percent approve of the riots, and 3 percent are thrilled by the protesters, while 14 percent of Russians are indifferent.

A new wave of protests and clashes between protesters and police in Kiev started after the Verkhovna Rada failed to register a resolution on reinstating the 2004 version of the Ukrainian constitution on February 18, upon which the opposition had insisted. Over 80 people died in the clashes.

This ultimately led to the change of government in the country: President Viktor Yanukovych has gone into hiding, and the Ukrainian parliament elected Oleksandr Turchynov as the new speaker and interim president on February 22.

The Verkhovna Rada also reinstated the 2004 constitution and scheduled early presidential elections for May 25. Yanukovych was declared internationally wanted on February 24 on suspicion of responsibility for mass killings of peaceful protesters.