"Russia has started blatant aggression against Ukraine under the guise of military exercises. The Russian Federation has sent troops to Crimea, which have not only seized the Crimean parliament and the Council of Ministers but are also trying to take control of communication facilities and the bases where the servicemen are stationed," Turchynov said in a televised address late on Friday.

"They are provoking us into [starting] a military conflict. According to our intelligence, they are following a scenario that is fully identical to the Abkhaz one, when, by provoking a conflict, they started the annexation of territories," Turchynov said.

He urged Russia to withdraw its troops from Crimea.

"I am personally addressing the president of Russia with the demand: immediately stop the provocation, withdraw the troops from the Autonomous Republic of Crimea, and work exclusively within the framework of the agreements signed," Turchynov said at a news briefing at the Ukrainian parliament on Friday evening.

Turchynov warned that the Ukrainian National Security and Defense Council has drawn up a plan for normalizing the situation in Crimea.

"We are sure that Ukraine will preserve its territory, Ukraine will defend its independence, and any annexation or intervention attempts will have very serious implications," Turchynov said.

The acting Ukrainian president supported the Ukrainian military servicemen currently deployed in Crimea and noted that he would like to calm down the civilian population. "The situation on the peninsula should be normalized in the near future," he said.

The Russian Foreign Ministry had reported earlier on Friday that Russia had passed a note to Minister-Counselor of the Ukrainian Embassy in Moscow Ruslan Nimchynsky regarding the movement of Russian Black Sea Fleet armored vehicles in Crimea, insisting that this was fully in compliance with the existing Russian-Ukrainian agreements. 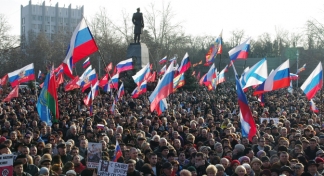 Reports that have been coming from Crimea in the past 24 hours suggest that self-defense units in Crimea have taken control of a number of facilities in the autonomous republic.