Gorbachev says deputies' appeals for his trial are personal PR

Interfax
Interfax
Former Soviet President Mikhail Gorbachev has dismissed as "total absurdity" the appeals of some State Duma deputies for trying him on the counts of causing the disintegration of the former Soviet Union.

Former Soviet President Mikhail Gorbachev has dismissed as "total absurdity" the appeals of some State Duma deputies for trying him on the counts of causing the disintegration of the former Soviet Union.

"These appeals are nothing but the wish of certain deputies for personal PR; they like being talked about and their names being mentioned, but this is an absolutely unreasonable appeal from the point of view of historical facts," he said in an interview with Interfax.

"If this is envy, there is nothing to be envious about. The deputies have many times asked for raising the president's pension at least to the level of parliament pensions but that possibility was not discussed," he said.

"And the numerous reports of my death posted in the past 20 days show that they see me as a hindrance. These people are shameless. Naturally, I do not respond to these statements, I mind my own business and my health," Gorbachev said.

State Duma deputies Yevgeny Fyodorov and Anton Romanov (United Russia), Ivan Nikitchuk and Oleg Denisenko (the Communist Party) and Mikhail Degtyaryov (the Liberal Democratic Party) have drawn up an appeal to Russian Prosecutor General Yuri Chaika requesting an inquiry of the prosecution service into the events, which took place during the disintegration of the former Soviet Union, Izvestia wrote on Thursday. 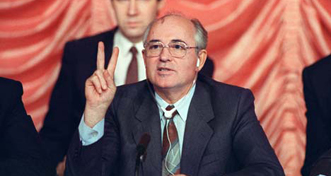 "The deputies indicated in their appeal that Soviet citizens supported the country's unity in a referendum but illegal actions of the Soviet leaders led to its breakup. Based on their appeal and the prosecutor inquiry, the deputies expect the opening of criminal cases, including the one against the last Soviet leader, Mikhail Gorbachev," said the newspaper, which had obtained a copy of the deputies' appeal.

The parliamentarians emphasized that the Soviet Prosecutor General's Office department overseeing the enforcement of state security laws opened a criminal case against Soviet President Mikhail Gorbachev on November 4, 1991. However, the Soviet Prosecutor General's Office repealed its own decision on the next day under the pressure of the last Soviet leader.

In the opinion of the deputies, such crimes do not have a statute of limitations and Gorbachev is no longer immune from prosecution.

Meanwhile, appeal co-author Mikhail Degtyaryov expressed hope that the inquiry might result in the first-lever legal evaluation of the events, which occurred over 20 years ago.