RBTH
Interfax
The Ukrainian government has called on Russia to comply with the provisions of the April 17 agreements in Geneva.

The Ukrainian government has called on Russia to comply with the provisions of the April 17 agreements in Geneva.

"The government is addressing another participant in the Geneva agreements, the Russian Federation. Ukraine is calling for implementing the Russian part of the agreements. We call for pulling out the troops and point to the importance of publicly denouncing support for terrorism and separatism. We suggest that Russia call on its supporters that are committing unlawful deeds on Ukrainian territory to stop the violence, release the hostages, and vacate the seized buildings," the Ukrainian Cabinet of ministers said in a statement available on its website.

The Ukrainian leadership is ready to listen to all legitimate demands of the people in the east and west of the country and accommodate them, the government said. "And we call for implementing the Geneva accords concluded between Ukraine, Russia, the U.S. and the EU," it said.

The Cabinet claimed credit for suspending the active phase of a counterterrorist operation in the eastern part of the country and insisted that protecting people from illegal armed groups is the main job of the Ukrainian authorities. "The Ukrainian law enforcement and security agencies will work in this very format," it said. As for the armed forces, their only job is to defend the citizens of Ukraine, it said.

In listing measures that the Kiev authorities have taken toward implementing the Geneva accords, the government said it has approved a bill on pardoning participants in riots who give up their weapons and vacate the administrative buildings they seized and submitted this bill to the Verkhovna Rada. In keeping with the Geneva accords, this amnesty will not apply only to those who committed grave crimes.

The Interior Ministry and the Security Service are continuing to seize unlawful weapons from civilians and disarm radical movements, organizations and sectors that are breaking the law, the government said. Nearly 6,000 firearms have been seized. "The atmosphere on Independence Square and on Khreshchatyk [Street in Kiev] is free and safe, nobody is being persecuted on ethnic and language grounds, and nobody is compiling any blacklists." 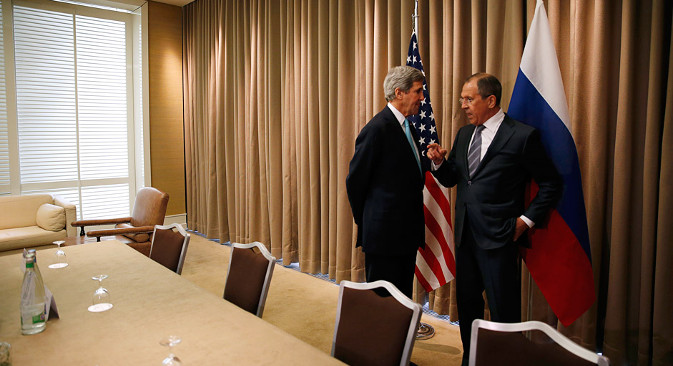 The government said it guarantees protection of the Russian language and its special status. Territorial communities will decide on the volume of rights to be granted to Russian or any other language.

"The Ukrainian government strongly condemns any manifestations of anti-Semitism, xenophobia, or intolerance. The Security Service is investigating the circulation of anti-Semitic leaflets in Donetsk," it said.

"The parliamentary coalition has appealed to all political forces to sign a memorandum of mutual understanding to settle the situation in the east of Ukraine. The government reminds Ukrainians in all regions: you have legitimately elected representatives at the parliament. We tell those discontented in the eastern regions: make your deputies work and defend your interests. They have all legitimate powers for this," it said.

"We have made our first steps to accommodate the other party. We expect practical steps on the part of those who are illegally occupying buildings and holding hostages," it said.