Ukrainian servicemen have losses in Slavyansk

"The number of the deceased is being updated," Avakov said.

"Anti-terrorist force servicemen found an ambush, a combat unit of terrorists. They [the terrorists] use heavy vehicles, large-caliber guns, mortars and other weapons," Avakov said as he entered Slavyansk. He added that people had been injured on both sides and up to eight Ukrainian servicemen were hurt.

In the words of Avakov, the hostilities started at about 10:45 a.m. local time. Approximately 800 people are fighting Ukrainian servicemen in Slovyansk, he said.

The interior minister said the mission was complicated by possible collateral damage of the civilian population. 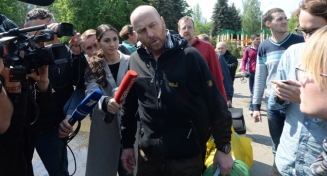 The website Slavgorod said two injured people were admitted to the trauma department of the local hospital. One will have a surgery in Slavyansk and the other has been taken to Kramatorsk for a vascular operation. "In all, the Slovyansk hospital has admitted twelve patients since May 2, and one of them passed away," the website said.

A Slavyansk self-defense staff representative told Interfax on the phone on Monday that Ukrainian servicemen had seized the television tower and the militiamen were retreating into the city.

"The television tower in Andreyevka, a suburb of Slavyansk, has been seized by the enemy. The fighting continues in Andreyevka and Semyonovka. We have to retreat behind the city limits. The enemy has entered the territory of Slavyansk," the source said.

In his words, several people were injured during the night and reports about a girl's death were being verified.