President Vladimir Putin described Victory Day as "a symbol of the Russian people's triumph" and said that Russia will always cherish the sacred memory of the past war and will never allow the betrayal of its heroes.

"We will always cherish this sacred and unfading truth. And we will never allow the betrayal and oblivion of the heroes - all those who selflessly safeguarded peace on our planet. May 9 was and will remain our biggest holiday, the day of triumph, national pride, mourning and eternal memory," Putin said at the Victory Parade. 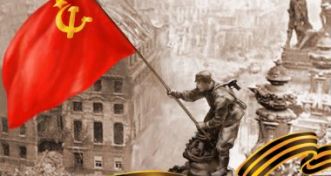 Putin, who is also the commander-in-chief of the Russian Armed Forces, said that May 9 "is a holiday that demonstrates the invincible power of patriotism, the day when all of us become emotionally aware of what it is like to be devoted to the Motherland and how important it is to defend the country's interests."

"The Soviet people's unbending will, fearlessness and staying power saved Europe from slavery. It was our native country that drove the fascists out of their den, and accomplished their crushing and final defeat at the price of millions of lives and the hardest of trials," Putin said.

"The victory was being forged at the front and at home, in partisan units and in underground resistance operations. It was being brought nearer to reach by the courage displayed during the siege of Leningrad, by the defenders of Sevastopol and by thousands of soldiers who stood firm defending their positions," Putin said.