RBTH
Interfax
Pro-autonomy militias in Slavyansk and Kramatorsk, the Donetsk region of Ukraine, claim to have killed at least 8 servicemen and destroyed several armored vehicles belonging to the government forces early on Wednesday.

Pro-autonomy militias in Slavyansk and Kramatorsk, the Donetsk region of Ukraine, claim to have killed at least 8 servicemen and destroyed several armored vehicles belonging to the government forces early on Wednesday.

"There was another armed clash at night, and the enemy again tried to launch an offensive at about 1 o'clock. However, we managed to rebuff the attack and destroy several enemy armored vehicles. Eight of their men have been killed and seven wounded. Unfortunately, we also have losses," Vyacheslav Ponomaryov, 'the people's mayor of Slavyansk', told Interfax on Wednesday.

"They used armored personnel carriers, they have fortified firing points there, and they used heavy mortars in the village of Andreevka. They mainly fight on the outskirts and fear to enter the city," he said.

Ponomaryov said also that the situation in both Slavyansk and Kramatorsk was calm on Wednesday morning. "Everything has been quiet since morning. There's been some shooting now and then, but we've become used to it," he said. 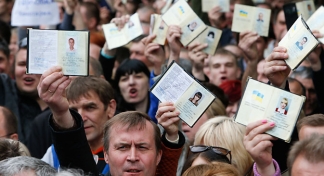 Interfax could not immediately obtain information confirming Ponomaryov's words regarding the night battles from alternative sources.

Ponomaryov assured Interfax that both Slavyansk and Kramatorsk have everything necessary to function.

"Our bakeries are working, bread is being baked, foodstuffs are being delivered to stores, there's money in the banks, and the hospitals are provided with all the necessary medications. We are bringing all this in, despite the enemy's attempt to blockade our cities," he said.

"Nevertheless, I think we'll be breaking this blockade in the near future," he added.

It was reported on Tuesday that seven Ukrainian paratroopers from the 95th Airmobile Brigade had been killed and eight others wounded in an armed clash with unidentified gunmen some 20 kilometers away from Kramatorsk.

The Ukrainian Interior Ministry reported on its website on Wednesday, quoting Oleksiy Dmytrashkovsky, a secretary for the chief of staff of the Ukrainian armed forces, as saying that from 30 to 40 gunmen had attacked the paratroopers.

He said with reference to locals that the gunmen had arrived at the scene in two Gazelle vans and a Zhiguli car and laid an ambush near a dam. Dmytrashkovsky said some of these gunmen were also killed and wounded.