RBTH
Interfax
A concept of the prospective Russia-China heavy helicopter may be elaborated by the end of this year, Russian Helicopters General Director Alexander Mikheyev said.

A concept of the prospective Russia-China heavy helicopter may be elaborated by the end of this year, Russian Helicopters General Director Alexander Mikheyev said.

"Hopefully, we will decide the helicopter concept and the project status this year," Mikheyev said at the exhibition HeliRussia on Thursday. Reporters asked him about the current status of the Russia-China heavy helicopter project. 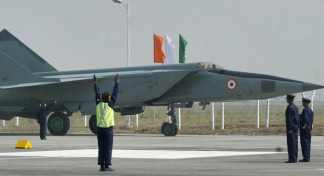 Consultations with China have been active, and their latest round took place during the Chinese visit of Russian President Vladimir Putin, he said.

"We have progressed a great deal on the helicopter concept over the past few months," Mikheyev said.

Russia and China will design their heavy helicopter on the platform of the world's heaviest helicopter Mil Mi-26, a product of Russian Helicopters' Rostvertol.

"This will be a brand new vehicle," Mikheyev noted.

He said the consultations with China would highlight the program status and the prospective market, which could be either China alone or third states. The possibility of producing the new helicopter in Russia for local consumers has not been ruled out either, he said.