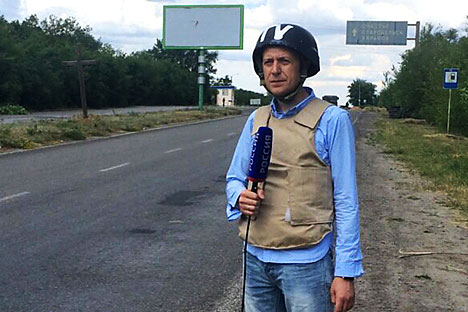 "The man who was brought to us with documents issued to Igor Kornelyuk died 35 minutes after being hospitalized," Babenko said.

Babenko said doctors had done everything possible to save the journalist, but he died when they tried to resuscitate him.

The Russian state broadcaster VGTRK has confirmed the death of its special correspondent, Igor Kornelyuk, as a result of an injury sustained near Luhansk.

"The information about Igor's death in hospital in the Luhansk region has just been confirmed," a VGTRK spokesperson told Interfax on Tuesday.

The fate of the television crew's sound operator, Anton Voloshin, is still unknown; currently he is considered to be missing, the spokesperson said.

Earlier the death of Kornelyuk was reported to Interfax by the deputy chief doctor at the Luhansk regional hospital, Serhiy Babenko.

Vladimir Inogorodskikh, the head of the press service for the self-proclaimed Luhansk People's Republic, said earlier on Tuesday that a VGTRK correspondent had been wounded in a mortar attack in the village of Mirny."

The VGTRK press service told Interfax Anton Voloshin, who was in the same group as Kornelyuk, is missing. VGTRK cameraman Viktor Denisov was not hurt in the attack.