Science & Tech
RBTH
Interfax
A Greenpeace crew has returned to the Arctic Sunrise vessel kept in the Murmansk seaport for nine months.

A Greenpeace crew has returned to the Arctic Sunrise vessel kept in the Murmansk seaport for nine months.

She said the ship would rejoin the Greenpeace flotilla after its condition was assessed and repairs were done. 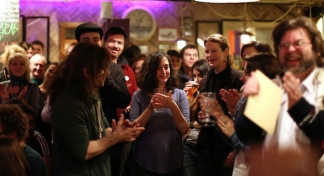 "Upon the completion of bureaucratic formalities we were finally given access to the Arctic Sunrise and regained the vessel. Its condition is far from being the best as it has had no proper maintenance for nine months. We will know what damage has been sustained and what repairs need to be done before the ship leaves Murmansk only after we examine it. We hope to bring the Arctic Sunrise back to our flotilla after repairs and it will be guarding the Arctic again," a source in Greenpeace said.

The Russian Investigative Committee released the Arctic Sunrise on June 6 from being impounded. The ship was detained during a protest staged by environmentalists in the Pechora Sea.

The State Duma declared amnesty in December 2013 on the occasion of the 20th anniversary of the Russian constitution. Arctic Sunrise crewmembers were found eligible for the amnesty.