RusBurger steals in ahead of Burger King in Crimea

The RusBurger fast-food chain is to open a restaurant in Sevastopol on the site of the city’s former McDonald’s restaurant, which closed in April 2014. The company’s spokesperson told RBTH that the restaurant is scheduled to open in July. 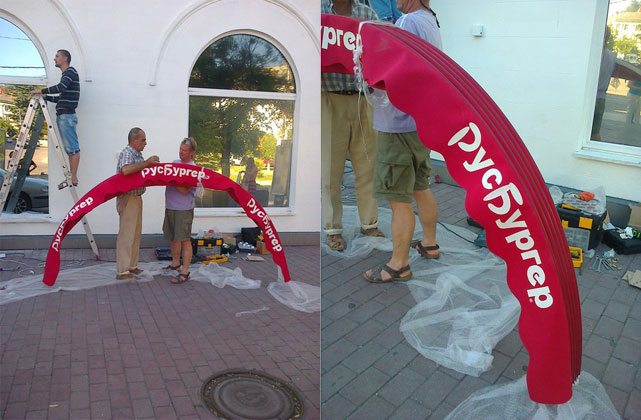 Photos of a new RusBurger restaurant in Sevastopol from the “New Sevastopol” community on the Vkontakte social network.

The RusBurger fast-food chain is to open a restaurant in Sevastopol on the site of the city’s former McDonald’s restaurant, which closed in April 2014. The company’s spokesperson told RBTH that the restaurant is scheduled to open in July.

In the “New Sevastopol” community on the Vkontakte social network, new photographs have appeared showing workers mounting a RusBurger sign on the façade of the building that was formerly home to a McDonald’s branch.

All three branches of McDonald’s in Crimea were closed following the peninsula’s absorption into the Russian Federation in March.

The restaurant in Sevastopol is directly owned by the RusBurger Company and is not a franchise operation. According to the company’s representative, future plans include the opening of restaurants in Simferopol, Yalta and Evpatoria.

RusBurger emphasizes that it is placing its bets directly on Russian customers, be they locals or tourists. “At the moment, Crimea, because it joined Russia, has found itself in a difficult situation, and so it is hard to predict the demand,” the company’s representative told RBTH. According to him, the company expects that the flow of visitors will be comparable to that which was enjoyed by its predecessor – McDonald’s.

About 30 restaurants under the RusBurger brand operate in Moscow, the Moscow Region, the Republic of Karelia, Stavropol, the Altai Territory, Lipetsk and Ufa. RusBurger positions itself as a Russian fast-food chain, using a selection of environmentally friendly products made by Russian manufacturers. The company estimates the minimum investment needed for opening one restaurant at 2.4 million rubles ($69,000).

Back in April it was publicized that the Burger King network was showing interest in the consumer market of Crimea. However, this announcement turned out to be premature. Because of the controversial status of the peninsula, Western companies still cannot open businesses there.

“Today, no Western company can work in Crimea, as franchising involves the transfer of a license, while Crimea, at this time, lacks the necessary political and legal field,” Yury Mikhailichenko, executive director of the Russian Franchise Association, explained to the Izvestia daily.

Combined report based on materials from ITAR-TASS, Izvestia and proprietorial data.