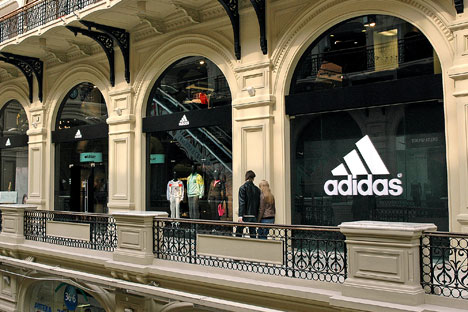 According to the statement, the company’s 2015 targets “are no longer achievable” due to “increasing risks to consumer sentiments” and demand in Russia, which is one of Adidas’s key markets.

German clothing and footwear manufacturer Adidas Group saw its stock price drop by 9 percent at the start of trade on the Frankfurt Stock Exchange on July 31. According to PRIME Business News Agency, the decline was a result of the company’s decision to lower its annual profit forecast due to an anticipated reduction in sales in Russia and the CIS. On the morning of July 31, Adidas released a statement forecasting net profits of 650 million euro ($870 million) in 2014, down from its previous forecast of 830 million euro ($1.1 billion).

According to the statement, the company’s 2015 targets “are no longer achievable” due to “increasing risks to consumer sentiments” and demand in Russia, which is one of Adidas’s key markets. The depreciating Russian ruble, which is driving down consumer spending, will also affect Russian sales. Adidas Group has significantly reduced its store opening plan in the market for 2014 and 2015, and plans to further increase the number of store closures as a response to these predictions. The firm counts on Russia for 16 percent of its total sales. Currently there are over 250 Adidas stores in the country.

The stock was also hurt by Adidas’s losses in the Russian market to its bigger U.S. rival, Nike. The U.S. firm, which has been encroaching on Adidas’ home territory of western Europe and making gains in the market for soccer apparel and footwear, extended its lead to take 15 percent of the global sportswear market in 2013 compared with 10.8 per cent for Adidas, according to Canadian paper The Globe And Mail.

Nike’s management revealed in late March that they do not expect the economic and political uncertainty in Russia to affect their business in the region, Forbes reported. Russia comprises only 25 percent of Nike’s total Central and Eastern Europe business, and a drop in sales in Russia should be manageable across the company’s portfolio.

Read more: Russian Post to develop internet shopping with the help of eBay