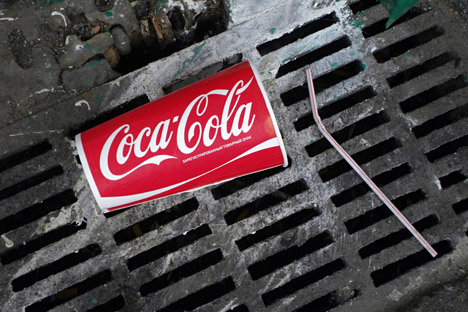 In early August, one of the largest advertisers on the Russian market, with an annual budget of more than 2.5 billion rubles ($70 million), the American Coca-Cola Company, suddenly removed all company advertising from four federal TV channels.

In early August, one of the largest advertisers on the Russian market, with an annual budget of more than 2.5 billion rubles ($70 million), the American Coca-Cola Company, suddenly removed all company advertising from four federal TV channels.

Kommersant learned from a source in the media market that Coca-Cola was stopping its advertising on four TV channels – REN TV, Pyaty Kanal, Domashny, and Zvyezda.

Yury Borisov, a representative of MediaVest (part of the American company VivaKi), an agency procuring TV advertising for Coca-Cola, and Director of External Relations of the Russian office of Coca-Cola, Anna Kozlovskaya, confirmed the  information.

They explained that the company had decided to focus on key federal channels, which were more effective for the target audience of Coca-Cola.

Last year Coca-Cola spent more than 2.5 billion rubles ($70 million) in Russia on advertising. Those channels, which will no longer broadcast advertisements for the beverage, accounted for only $4–5.5 million (150–200 million rubles).

According to market participants, the budgets for these four channels are now likely to be redistributed to other media holdings, including Gazprom-Media.

Kommersant's sources, which are representatives of the industry, do not rule out that such a decision could be related to the U.S. sanctions against Russia. Three of these channels (except for Zvyezda, which is run by the Ministry of Defense) are part of the National Media Group, which is controlled by Bank Rossiya, with which American companies are forbidden to work due to the sanctions.

Major advertisers rarely leave individual federal channels. One of the sources of Kommersant warns that cutting advertising, as a rule, can lead to the imposition of fines, which “may be comparable to the cost of the placement of the advertisements."

However, two other sources in the advertising market believe that Coca-Cola may have considered these channels as unnecessary for its promotion, and the decision is therefore economically expedient for the company, despite any penalties.