Interfax
Interfax
The humanitarian aid convoy for south-eastern Ukraine is under the aegis of the International Committee of the Red Cross (ICRC), and the committee will deal with distributing this aid on its own without the participation of the Ukrainian authorities.

The humanitarian aid convoy for south-eastern Ukraine is under the aegis of the International Committee of the Red Cross (ICRC), and the committee will deal with distributing this aid on its own without the participation of the Ukrainian authorities.

"Our procedure is that, if we take this convoy under our wing and it proceeds under our insignia, then we deal with distributing this aid on our own," PR department head of the ICRC regional delegation for Russia, Belarus and Moldova, Victoria Zotikova, told Interfax on Wednesday.

When asked whether this meant that the Ukrainian authorities would not be engaged in this process, Zotikova said: "Yes, the ICRC will deal with this jointly with the Ukrainian Red Cross association."

While distributing humanitarian aid, "we take into account where the greatest needs exist as well as security issues," she said.

The ICRC is currently studying the information received from Russia regarding the contents of the humanitarian convoy heading for Ukraine and expected Moscow and Kiev to agree on the convoy's fate after crossing the Russian-Ukrainian border, Zotikova said.

"They gave us lists of the convoy's contents yesterday. These are quite long lists and we are studying them now," she said. 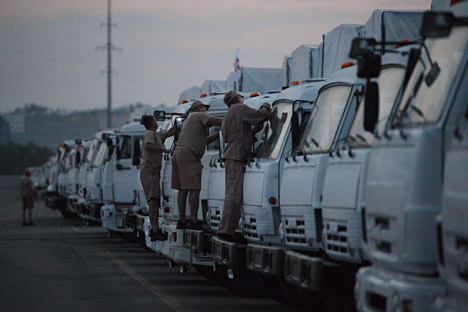 "At the same time, we do not have all the information regarding the agreements between Russia and Ukraine concerning how all this [the convoy crossing the border and further delivery of the humanitarian aid] will be implemented,"Zotikova said.

"We are waiting now for an agreement between Russia and Ukraine to be announced," she said.

As to the statements of the Kiev authorities that the ICRC should be the one to form the convoy with the humanitarian aid in Ukraine, the Red Cross does not have own vehicles in Ukraine, Zotikova said.

"It does not matter on which vehicles cargo is moved, the two parties are to agree on their own here as to the who, how and when," she said.

Earlier on Wednesday Ukrainian Interior Minister Arsen Avakov said the Russian humanitarian convoy will not be allowed into the Kharkiv region.

For his part, Ukrainian Prime Minister Arseniy Yatsenyuk said Kiev can only accept humanitarian aid from the International Committee of the Red Cross (ICRC).

Russia has made an agreement with Ukraine and the ICRC (International Committee of the Red Cross) and sent humanitarian aid containing food, medication and power-generation equipment. In doing so Russia took into account Ukraine's requests concerning the motorcade itinerary, cargo inspection and other aspects of the delivery operation. Russia agreed to take representatives from the ICRC, OSCE (Organization for Security and Co-operation in Europe) and Ukrainian government on board its aid trucks.