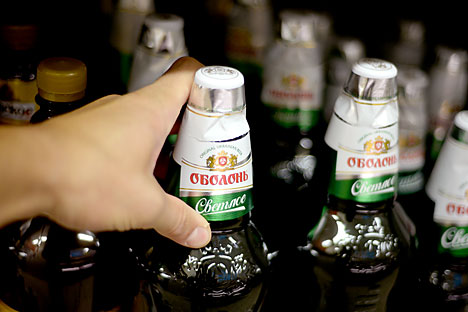 The Russian consumer-rights watchdog Rospotrebnadzor has announced its decision to suspend imports of certain types of Ukrainian-made alcoholic drinks from August 15.

The Russian consumer-rights watchdog Rospotrebnadzor has announced its decision to suspend imports of certain types of Ukrainian-made alcoholic drinks from August 15.

"The Federal Service for Supervision of Consumer Rights Protection and Human Welfare hereby informs us that the inspection of Ukrainian-made vodka, beer and beer drinks in the course of state supervision of food products distribution has revealed multiple violations of the legal requirements for consumer rights protection (non-compliance with the product-marking requirements)," the agency said in a statement on Wednesday.

In particular, this is true for the Obolon beer which, the agency says, failed to meet requirements for calorific values and organoleptic properties.

Also, the beer made by San InbevUkraina, failed to comply with the product-marking requirements, while alcohol drinks made by the Ukrainian Distribution Company failed tests on alcohol percentage and organoleptic properties.

"To protect consumer rights, Rospotrebnadzor has, from August 15, 2014, suspended imports of alcohol drinks, beer and beer drinks by these makers," the statement said.

All tests were carried out by experimental laboratory centers accredited in Russia and internationally, the watchdog said.

In accordance with the WTO (World Trade Organization) rules, this information has been sent to an authorized body, the Federal Customs Service and the Rospotrebnadzor Department for Russian regions.

Infographics: Which countries are affected by Russia's food embargo?