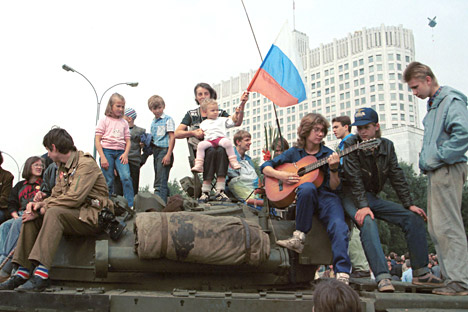 Only a few people (9 percent) insist that 1991 was the year of "victory of a democratic revolution which put an end to Communist Party rule." 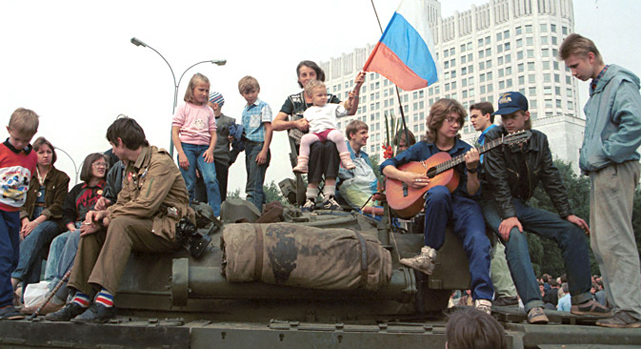 Tens of thousands of Yeltsin's (center) supporters gathered around the president’s residence at the White House in Moscow. Source: ITAR-TASS

A relative majority of Russians (41 percent) see the August 19, 1991, putsch in the former Soviet Union as a tragedy which had harmful implications for the country and its people.

The number has grown 14 percent in the past 20 years, from 27 percent in 1994, the Levada Center pollster told Interfax, referring to a nationwide poll held in late July.

The events are seen as a tragedy mostly by businessmen (52 percent), pensioners (48 percent), Russians older than 55 (49 percent), people with secondary education (46 percent), respondents with a low and high consumer status (46 percent in each category) and people in cities with a population less than 100,000 (51 percent).

Only a few people (9 percent) insist that 1991 was the year of "victory of a democratic revolution which put an end to Communist Party rule." The opinion is mostly asserted by present-day executives and managers (22 percent), businessmen and specialists (17 percent in each category), Russians aged 25 to 40 (12 percent), people with higher education (14 percent), people with a high consumer status who can easily afford a car (21 percent) and Muscovites (33 percent).

In the opinion of 74 percent of the respondents, the country took a wrong turn after the putsch. This was mostly said by businessmen (64 percent), salaried workers (55 percent), pensioners (54 percent), Russians older than 55 (55 percent), people with a low consumer status (50 percent) and people in cities with a population from 100,000 to 500,000 (58 percent).

Twenty-seven percent of the respondents argued the opposite, and 26 percent were undecided.

The political crisis of August 1991 was triggered by the attempt of some senior Soviet officials to disrupt the signing of a new union treaty. Soviet President Mikhail Gorbachev was isolated in his Crimean residence for that purpose.

Boris Yeltsin, then president of the Russian Soviet Federative Socialist Republic, and other leaders of the Russian Federation headed the resistance to the attempted coup, which ended on August 22 with the arrest of the conspirators, one of whom, Interior Minister Boris Pugo, committed suicide.

Related topic: Fall of the USSR>>>