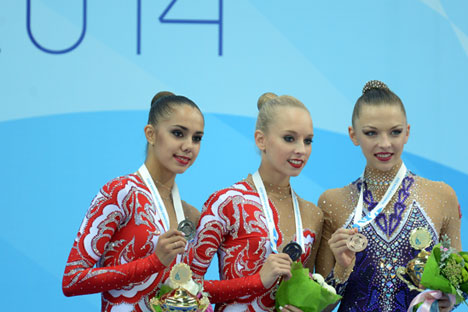 The Russian team has triumphed in the group competition at the Rhythmic Gymnastics World Cup Series finals in Kazan.

The Russian team has triumphed in the group competition at the Rhythmic Gymnastics World Cup Series finals in Kazan. The Russian athletes won gold in the clubs event, having scored 18,600 points, and came in third in the ball and ribbon events, with 17,600 points, leaving their rivals behind. The silver medal went to the Belarusian team (17,650 points in the ribbon event and 17,650 in clubs), with the Bulgarians winning the bronze (17,550 and 17,650 respectively).

Russian gymnasts led in the individual competitions too. Margarita Mamun came in first with the hoop, scoring 18,500 points, with her compatriot Yana Kudryavtseva coming in second (18,450 points) and South Korea's Son Yeon-jae coming in third (18,000).

Kudryavtseva also triumphed in the clubs and ribbon events, leaving behind Belarusians Staniouta and Katsiaryna Halkina. The winner's score was 19,000 and 18,450 respectively.