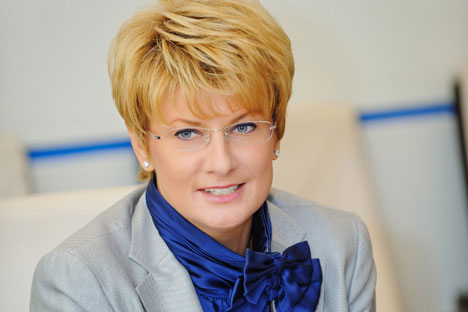 Olga Pleshakova, the CEO of Transaero Airlines, has been awarded a leading ranking in Fortune magazine’s annual index of the world’s most powerful women.

Olga Pleshakova, the C.E.O. of Transaero Airlines, has been including on Fortune magazine’s annual ranking of the world’s most powerful women.

She was named the 20th most powerful woman in the Europe, Middle East and Africa (EMEA) region. Pleshakova is the only Russian on the list.

Published annually, Fortune’s international rankings are compiled by editors who consider four criteria: the size and importance of the woman's business in the global economy; the health and direction of the business; the progression of the woman's career; and her social and cultural influence.

It is the third year in a row that Pleshakova has featured in the U.S. business magazine’s “Most Powerful Women” listing.

This year, for the first time, Fortune organized its rankings regionally, with separate lists for EMEA, Asia-Pacific and North America.

Olga Pleshakova has been CEO of Transaero, the largest privately- owned international airline in Russia, since 2001. She is the first Russian women to lead a major airline.