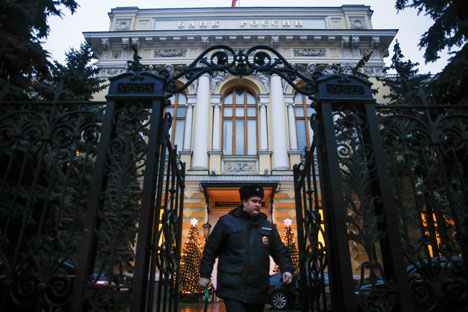 Central Bank of Russian Federation. Source: AP
Russia's Central Bank has lowered the key interest rate from 17 to 15 percent, propelling the ruble into a fresh slump against the U.S. dollar.

The decision, made following a board meeting on Jan. 30 according to an official statement released by the regulator, took the market by surprise. Experts had expected the bank to preserve its 17-percent key rate, as with inflation remaining high there was no clear prerequisite for its reduction,

"The geopolitical situation is far from being regulated," analysts from Credit Suisse told the RIA Novosti news agency. "At a time when the government can contain the currency's fluctuation during periods of overpressure, we don't think that these measures can prevent the ruble from falling."

Consequently, after the Central Bank's decision the ruble once again fell to a minimum against the dollar. Moreover, Credit Suisse expects the Russian currency to fall by a further 20 percent.

Earlier the Central Bank had explained that an extremely high key rate was necessary first of all in order to stabilize the ruble. After the decline in oil prices in the fall of 2014 the national currency fell by 50 percent against the dollar and euro.

As a result, Russian exporters, primarily oil and gas producers (almost 80 percent of Russian exports) preferred to take out loans in rubles to pay off their debts, while holding back their dollars for future use. In order to break the deadlock, in December 2014 the Central Bank decided to raise the key interest rate from 10.5 to 17 percent.

The key rate is a universal indicator below which banks usually do not give loans. Consequently, the Central Bank's decision led to a sudden halt in the issuing of credit in Russia.